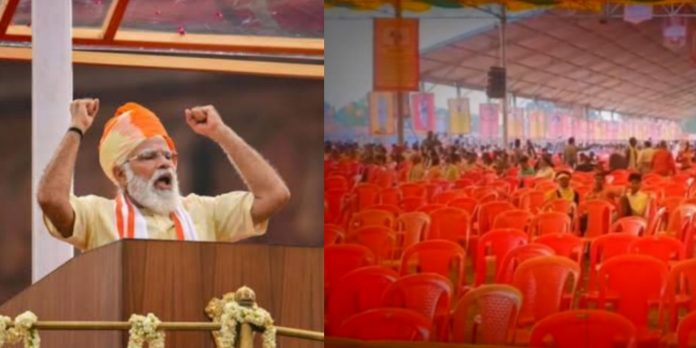 There was a touted claim that a human ocean would assemble to listen to BJP PM Narendra Modi on November 15, at Bhopal, Madhya Pradesh, to rename Habib Railway Station to Rani Kamlapati Railway Station, but what turned-out were only a few people, who too were imported, to listen to PM, as the double-engine BJP government led by MP CM Shivraj Singh Chauhan saw it all end into a super-flop-show! Rani Kamlapati was married to Nizam Shah, and was a Gond in terms of her caste, as BJP charted to play OBC card, and pillorying it against Muslims of course, in order to further accentuate the political atmosphere in BJP favour.

The picture very ably shared by newspapers, including The Indian Express, on November 16, is ironically from PM Narendra Modi’s twitter account, which is far bereft of the real picture, as the ground report, from the venue, is an altogether different scenario, so much so, that the entire programme may be summed-up as a damp squib. 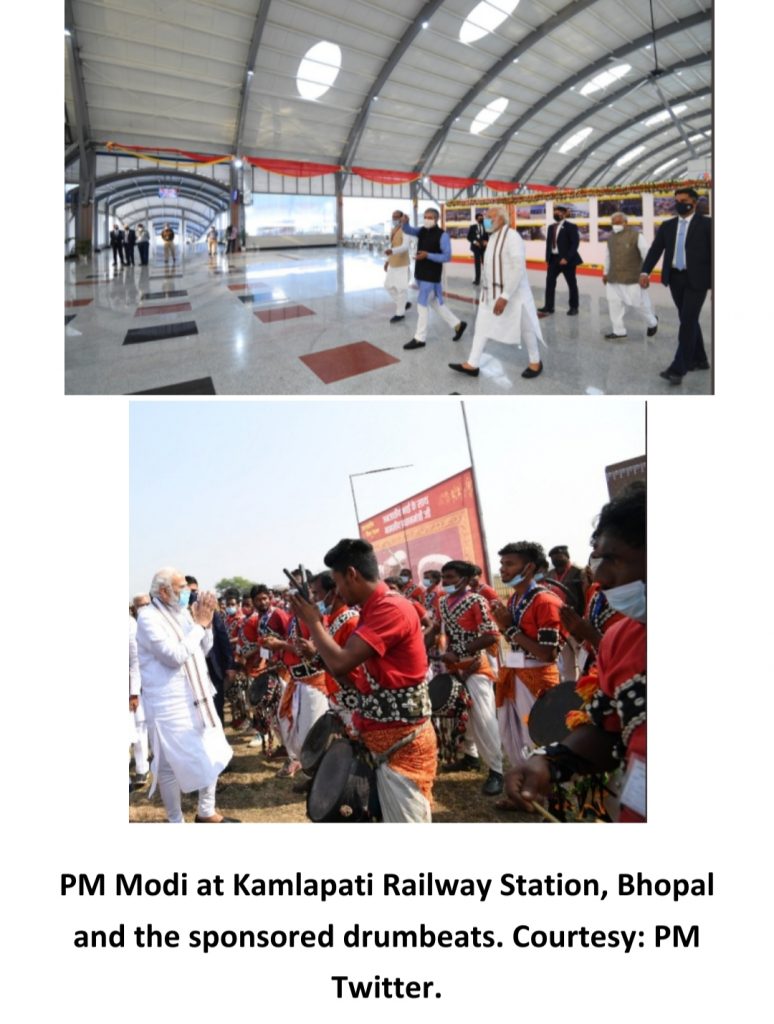 The details percolating from social-media, which is the only medium through which the official media machinery, can be halted, is that the much acclaimed ‘2.5 lakh Adivasi ( tribesmen) people expected to attend PM rally’ , by Shivraj Singh Chauhan turned-turtle and the whole show instead to barely put people not even a few thousand, instead of what was pushed-out officially. The reality however is now available as while PM addressed, people can be seeing vacating the venue, and to set the record straight, the chairs numbering more than a lakh, were jam-packed but lying vacant too, there was no one available to sit! While PM Modi, CM Chauhan and Union Railways Minister Ashwini Vaishnav stood at the stage, gazing in space.

By any conservative status, Modi to be sure, might never have estimated such a dismal crowd at his function, which that too, had started to move-out once he started to speak , as what the picture below suggests, is now an ample proof that people instead of speeches want results and solutions, but the resultant, is as yet, perhaps nothing!

People, from all across the nation, are proving by and large, that BJP has lost to the aspirations of the general people, more particularly so, as it has passed the three-black agriculture laws, which has triggered farmers to start to protest since September 2020. But, what is now to be garnered is the sum of people’s money spent on the four-hours devoted to PM? A staggering 23 Crore! And Rs 13 Cr. out of which is said to have been spent on transporting people. Will any agency probe it to find these day-to-day scams and the merciless floundering of people’s money in a nation which has been relegated to 101/ 116 rank on global hunger index. Can there be an expectation of a suo-moto by the Bhopal High Court? By any standard, this hefty amount of state exchequer has been washed-into-the-drain as a few thousand people were available on the site.

If BJP had really any idea of planning to uplift the Adivasis, unlike celebrating the pseudo Jan Jatiya Gaurav Diwas, this amount of 23 Cr could have added to their fortunes. A state-of-art medical hospital and a school, instead could have been opened, provided if BJP had ever had such a welfare idea for tribesmen and for other people too! All has been glossed over the ‘purported-event’ of Modi. But, going by what was witnessed in Bhopal and the abysmal presence, despite, the state treasury thrown wide-open, it makes clear that the coming elections, BJP is likely to have had it. When a sponsored crowd did not turn-up, then the general people, seething anger, against BJP can easily be assuaged.

Precisely, regarding the Adivasis, how BJP has fared, can be felt through an incident that in district Sidhi of MP, an Adivasi family has accused BJP MLA Kedarnath Shukla and his brother to have forcibly gulped their 17.41 acres of land, and obviously there is no one to listen to, although he has filed a case in SDM Court. The incident cannot be dismissed as an isolated event as it concerns an Adivasi and a ruling party BJP MLA. The video of this Adivasi’s helplessness against the mighty BJP was in circulation from quite before the purported love of BJP for the Adivasis (sic).

How public money is mis-utilized for the propagation of BJP, was also recently uncovered, on the occasion of Union Home Minister Amit Shah visit to Azamgarh, UP, on November 13, as it came to be known that UP Public Works Department gave Rs 40 lakhs to District Magistrate Azamgarh to mobilize crowd for Amit Shah, reported Amar Ujala on the same day. This is how BJP is desperately trying to keep-up-its face, by putting into force all the state resources, for its ends.

But, here what would be worthy is to juxtapose the mammoth and willing crowds thronging the programmes attended by Samajwadi Party Chief Akhilesh Yadav, as was seen by all, during the Gorakhpur rally on November 13. Why it becomes all the more important, is due to the fact, that while Azamgarh is the Parliament seat of Akhilesh Yadav, Gorakhpur is from where UP CM Ajay Singh Bisht comes from. The same zeal from general masses was felt on Akhilesh Yadav visit to Kushinagar, the next day. Change is now definitely on the cards and it is increasingly becoming clear that SP is to take up the cudgels to form the next UP government in 2022. It is now only a matter of days when the model code-of-conduct would be in place and what happens early next year is for all to see.