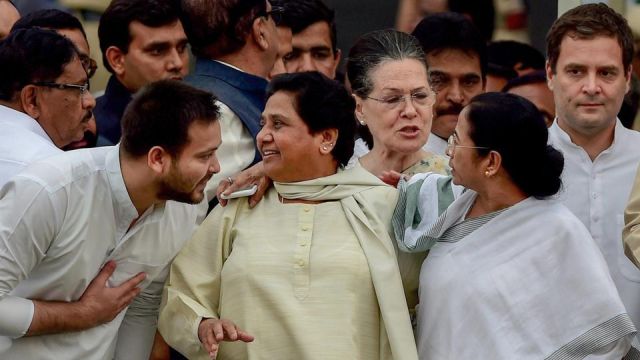 New Delhi : With his party ‘stopped’ in Karnataka and bracing to face crucial Assembly elections in three major states in the north this year end, Prime Minister Narendra Modi takes his government into the last year in office with the political momentum slightly shaken against the mounting burden of fulfilling expectations on numerous election promises.

Political analysts say that many of the promises of the Modi government have been rhetoric and it needs course correction by being more accommodative over the next year if BJP’s prospects are to improve.

They said the outcome of 2019 elections will largely depend on opposition parties coming together to pose a common challenge to the BJP.

The BJP’s inability to form the government in Karnataka, despite being the single largest party, has come as a damper to the party. It had suffered jolts earlier this year in defeats in prestigious parliamentary by-elections in Gorakhpur and Phulpur as also Ajmer and Alwar.

“Intolerance has been a major drawback in the last four years,” says political analyst and senior journalist H.K. Dua adding that the idea of India as a plural polity had suffered due to incidents like ‘love jihad’ and lynchings.

Dua said constitutional institutions “have not been shown the respect they deserve.” He said consensus between the ruling and opposition parties for running parliamentary democracy has been ignored. “The initiative had to come from Prime Minister but that has not come,” he said, adding there is doubt how deep is the faith of government in democratic practices.

“I don’t think in 2019 there will be Modi wave. Opposition will be able to present a formidable challenge if they unite. So the unity is very, very important.

But even as efforts to forge understanding among opposition parties continue at various levels, Modi continues to have a cross-country appeal as the prime vote-catcher of the BJP.

As Prime Minister, he has sought to bring speed to decision-making by cutting red tape, set ambitious targets, launched some imaginative schemes, focused on delivery, simplified norms and shaken off lethargy in the official machinery.

The BJP-led National Democratic Alliance government is seen to be more focused and target-oriented but there is little visible impact of some of its initiatives such as the Swachh Bharat Campaign.

Subrata Mukherjee, a political analyst who taught at Delhi University, said there have been more promises than delivery in the past four years and projects like Start Up India and Make in India have not progressed the way they were made out to.

“The economic record of the government is not very good and they are now postponing everything to 2022. That is beyond their mandate. So it is politics of postponement,” he said.

He said most of the schemes are a rehash of Congress schemes.

“They will have to work out accommodative politics, bring new segments. The scheduled castes, Muslims are angry. If they want to retain power, they will have to go for drastic course correction,” he said.

He said opposition unity was important for good politics and the proposed federal front cannot do without congress. “BJP will also have to understand that 2019 will be coalition government whether led by it or the Congress,” he said.

Unlike the 2014 elections, when he was the challenger, Modi will be the incumbent in 2019 and the opposition has a plethora of issues to queer the pitch including jobs, price rise, problems of farmers, multi-crore banking frauds, non-performing assets of banks, “write-offs” of corporate houses, and “atrocities” against weaker sections including Dalits.

Congress President Rahul Gandhi is also now a more formidable opponent of Modi than he was in 2014 and his attacks are sharper and unrelenting.

Congress General Secretary Ashok Gehlot said people had trusted Modi but he “betrayed” them. As a member of the opposition, he sees an all-round failure in the government.

“Farmers, youth, traders, women, everyone now feels betrayed. There is sense of fear and mistrust among people. Fuel prices are sky-rocketing. This is a loot. The situation in the country is such and all sections of society are so unhappy that the people will force every party in the country to come together to defeat Modi and the BJP,” he said.

“These will be best remembered for ushering in a New India Era with corruption-free governance, inclusive economic growth with special focus on farmers, women and marginalised sections,” Rao told IANS.

He said that Prime Minister Narendra Modi’s government has fulfilled long neglected basic needs of the common citizens with innovative schemes like Ujjwala.

The Ayushman Bharat scheme, announced in this year’s budget which aims to provide health insurance cover of Rs 5 lakh to around 10 crore families is an ambitious move to connect with the poor and, if successful, can help BJP earn goodwill in run up to 2019 Lok Sabha polls.

The elections in Madhya Pradesh, Rajasthan and Chhattisgarh later this year are expected to set the tempo for the Lok Sabha polls and the BJP is the incumbent in all three states facing tough contests.

(Prashant Sood can be contacted at prashant.s@ians.in)