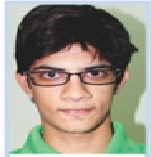 Bhopal, May 4: Talent is hard to hide and suppress – Moin Khan of Indore is the latest evidence. Moin Khan has topped the Madhya Pradesh Pre Engineering Test 2013 whose results were announced on 2nd May. The test was held 21st April.

Moin Khan of Indore has got 187 marks out of 200 and got top position in the state. The exam was conducted by the Madhya Pradesh Professional Examination Board.

In the merit list of top 10, four are from Indore, one each from Gwalior, Bhopal, Vidisha, Khargaon, Jabalpur and Muraina.

Total 1.02 lakh candidates had appeared in the entrance test held in April, some 22,223 were girls. In the top 10, only one is girl student.