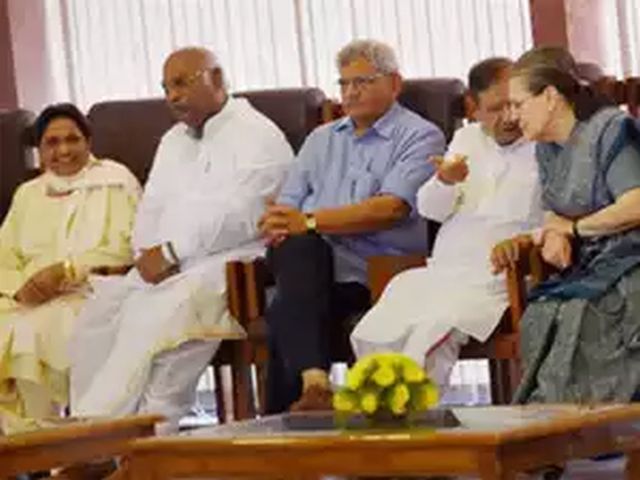 New Delhi : Most political parties, including those friendly with the BJP, told the Law Commission on Saturday that they are opposed to the proposal of simultaneous elections to the Lok Sabha and state Assemblies saying that it was against the constitution and would dilute regional interests.

Parties that opposed the proposal included Trinamool Congress and CPI and IUML. AIADMK, which is perceived to be close to the BJP, and BJP ally, Goa Forward Party, opposed it. AIADMK said it was opposed to holding simultaneous elections in 2019 but can consider the proposal in 2024 if there is a consensus on the issue.

Shiromani Akali Dal (SAD), a part of BJP-led National Democratic Alliance, supported the proposal, which has been strongly articulated many times by Prime Minister Narendra Modi.

The Law Commission had written to recognised national and state parties to participate in consultation on simultaneous polls being held by it on July 7 and 8.

Trinamool Congress MP Kalyan Banerjee, who put forward party’s views before the Law Commission, later said that Modi’s concept of simultaneous elections in the country is “impractical and unconstitutional.”

“It is impractical, not possible and contrary to the Constitution. Democracy and government should be given priority. The financial issue is secondary, first priority is the Constitution and democracy. Constitution has to be upheld,” he said.

AIADMK leader M. Thambidurai told reporters that it was not possible to hold simultaneous elections in 2019.”

“It is not possible in 2019 because people of states like Gujarat, Punjab, Himachal, Tamil Nadu and others have voted a government for five years. Let these assemblies complete their full “erm,” he said.

Thambidurai, who is Lok Sabha Deputy Speaker, said if needed the proposal could be considered in 2024. “At that time we can consider. The people and the stake holders should be given adequate time to present their views. It needs constitutional amendment. If they bring it for constitutional amendment in 2024, we will consider it. We don’t want simultaneous polls in 2019,” he said.

GFP President Vijai Sardesai said they had expressed our opposition to the proposal obecause it goes against federalism.

“It would affect the federal structure of the country. The entire proposal is impractical. It won’t work,” Sardesai said.

He said that if the proposal was implemented, the regional issues would go to the back burner. “The idea is good but will dilute issues of regional na”ure,” he said.

CPI leader Atul Anjan said the Law Commission had been asked to hold consultations as par” of “One country, One ele”tion” agenda being pushed by Modi”

“The CPI feels that holding simultaneous elections to Lok Sabha and assemblies in the present social and economic conditions, when states have their own agenda and difficulties, is against the basic spirit of the Constitution.”

Anjan said he came to know from the Law Commission that the Law Ministry has asked them to examine the concept and parliament is the right platform to discuss the issue.

He said elections have become very expensive and it was in national interest not to spend so much money. Gujral also said that imposition of Election Code of Conduct ahead of elections impacts decision making and almost one year of five-year term of a government goes in preparing for various elections.

Indian Union Muslim League opposed the proposal with its secretary Khorrum A. Omer telling the Commission that it will not make any significant improvement in the electoral process.

CPI-M General Secretary Sitaram Yechury had written a letter to the Law Commission earlier this week and termed the idea of simultaneous polls as “inherently anti-democratic.” Yechury said the proposal “negates the principles of federalism which is a fundamental feature of Indias Constitution”.

Yechruy had turned down the Law Commission’s invitation for a personal discussion on the matter.

Congress indicated that it will present its views before the commission”

“We are in talks with all the opposition parties and we shall be taking a joint decision on that. We are not going to boycott. We are going to talk to the opposition leaders and come up with our own sugg”stion,” party leader R. P. N. Singh told reporters at its official briefing.

The Law Commission had come out with a draft white paper in April on the simultaneous elections to the Lok Sabha and the assemblies that contained its possible recommendations.

It said that simultaneous elections may be restored in the nation by amending the Constitution, Representation of the People Act of 1951 and the Rules of Procedure of the Lok Sabha and Assemblies.

It said that elections in 2019 could be held in phases with some states going to the polls along with 2019 Lok Sabha polls and the others in 2024.

Another proposal was that parties which introduce the no-confidence motion should simultaneously give a suggestion for an alternative government.

The commission had said that simultaneous elections were held in the country during the first two decades after Independence up to 1967.

Commission sources said that consultations may continue on July 10.