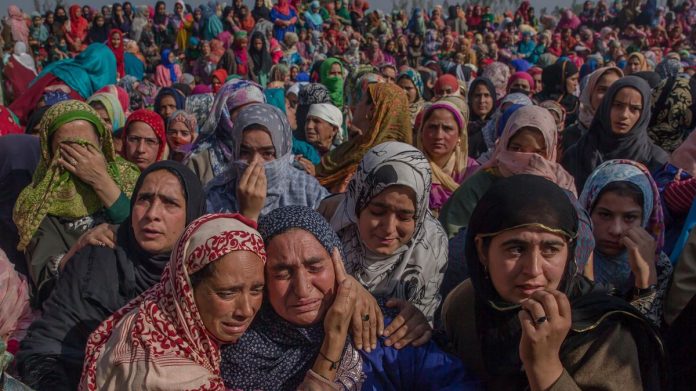 While people are celebrating the Mother’s Day all across the globe, Kashmiri mothers continue to live with pain, agony and separation in their blighted hearts. Unallocated with the political beliefs and agenda, mothers in the valley continue to be the sufferers of the conflict.

The spilled blood of their future on the roads does delineate statement from politicians, media and security forces however in the end it is the mother who suffers the forfeiture through the hands of greedy good-doers.

On one hand, mothers are honored by their children for their contribution to the families and society while as on the other hand, Kashmiri mothers are waiting in despair for their sons to return. Kashmir being a bone of contention between India and Pakistan has done more damage to the mothers of the valley than to anybody else. The cult of disruption and divisiveness over a piece of land is snatching the future of mothers.

With no hope from political parties, the tears of helpless mothers have dried up. Limiting death of a civilian, a police official or a follower of any ideology to specific tweets has become a norm for the traditional parties. Since years altogether, the power-hungry politicians are busy fructifying self-serving agendas depending upon their political requirement. Playing politics on the blood of Kashmiris by espousing venom that emotionally disrupts young minds has done irreparable damage to thousands of families in the valley.

The unrest in the valley, the social turmoil and insurmountable challenges has been the formidable task for Kashmiri mothers so far. It is all the more ominous that the inimical power has used the youth as a lucrative target to strengthen their agendas in the valley.

With sense of insecurity and victimhood prevails among the Kashmiri mothers, most of them have landed up in Psychiatrist and Trauma Hospitals. Those saying that the empowered mothers of Kashmir can change the course of history fail to understand the Kashmir issue at a very basic level thus viewing Kashmir through the prism of national media.

World needs to know that Kashmiri women would celebrate Mother’s Day when justice would be served to them. Mourning and waiting for their loved ones to return, this is how Kashmir celebrates Women’s Day. In an attempt to reconstitute the meaning of motherhood in contemporary Kashmir positioned in geo-politics, the story remains open-ended to seek measures to overcome the loss unfeasibly.