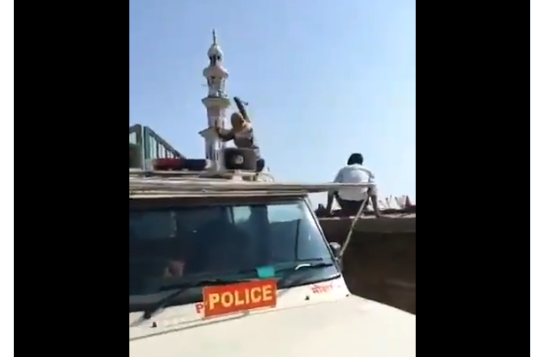 Indore :Several persons were injured  a Mosque vandalized when a Hindutva mob  pelted stones on Muslim locality  on Tuesday near Indore to raise awareness about the construction of Ram temple in Ayodhya, officials and the media said.

The incident took place in Chandankhedi village when the rally was taken out to raise awareness and collect donations for the Ram temple in Ayodhya.

According to the Indian Express, those people who participated in the rally chanted Hanuman Chalisa in front of the mosque while the prayers were being offered inside the mosque. The situation turned violent after some of the Hindtuva vandals, chanting Jai Shri Ram, climbed atop the mosque and damaged the minaret. The videos also showed Hindtuva activists trying to burn down houses and damaging several vehicles.

More than a dozen persons suffered injuries in the stone pelting incident. The cops are investigating the matter and have taken five persons involved in the incident into custody.

“Twenty-four people, mostly from the village, have been rounded up based on video evidence,” Indore Inspector General of Police Yogesh Deshmukh said. “There will be more arrests on both sides and people who climbed atop the mosque will be identified and booked under relevant sections.”