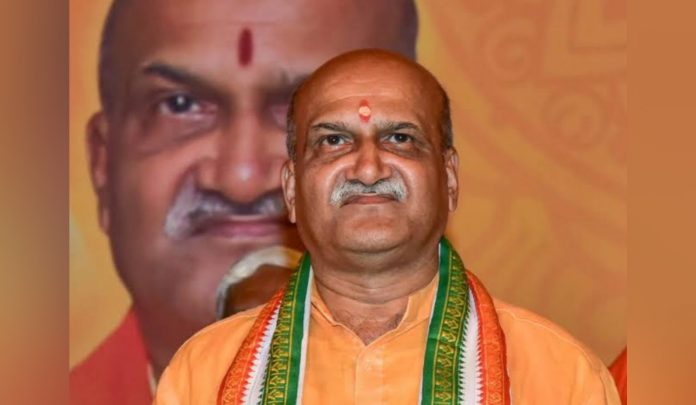 Muthalik was planning to meet Somu Gudi, an arrested activist of Sri Rama Sena in connection with a stabbing case that took place during the celebration of Muharram festival.

District Commissioner M.L. Vaishali has issued orders prohibiting the entry of Muthalik till August 14 midnight to Gadag district in the view of maintaining peace, law and order. The orders have been issued as per IPC Sections 133, 143 and 144. The directions have been given to the police department in this regard to initiate action in case of violence of orders.

Toufeeq Hosamani (23) and Mustaq Hosamani (24) were stabbed in Mallasamudra village near Gadag during a Muharram procession on Tuesday. The youth had sustained injuries in abdomen, chest and legs.

The condition of Toufeeq Hosamani, who is undergoing treatment at GIMS hospital of Gadag, is stated to be serious. The cauused Somesh Gudi, Yallappa Gudi and their associates are in police custody.

Meanwhile, in retaliation to the stabbing incident, family of the victims along with hundreds of community members including women had attacked the house of accused Somesh Gudi. The violent mob had smashed the doors, windows of the house and assaulted the family members.

Security has been intensified in the sensitive areas of the district. — IANS

Now, campaign for ban on halal products in Karnataka