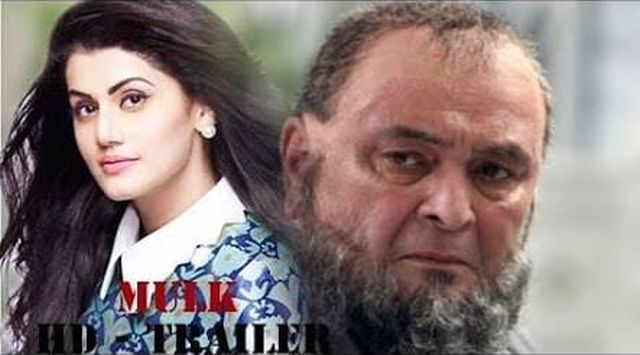 A review by Areeba Saghir for MuslimMirror.com,

At a time, when cows are being revered more than humans, when the murder of journalists and scholars like Gauri Lankesh, Narendra Dabholkar has jolted the nation, when universities are being attacked across the country, when fear, intimidation and lynching has taken a grip over the nation, Anubhav Sinha’s Mulk reposes our faith in the country’s constitution and its judicial functioning. It is a commitment and a reassurance to every Indian, of any faith, of a secular India. It seems to reignite the flame which our constitution makers and great leaders had lit decades ago.

Unlike his earlier classics, Tum Bin and Ra.One, Mulk is a reflection of the present day condition of the society where fear and terror is being instilled in the minds of the minorities, deliberately and thoughtfully in order to erode the secular fabric of the nation and re-write the constitution doomed in darkness, division and distrust. Fear mongering has become rampant these days which is alienating a considerable section of the society.

The film is fraught with complex emotions and sufferings of a Muslim family. The excruciating pain…the aching loss of their son at the hands of radicalists, the afflictions of social ostracization, the daily verbal spat between right & wrong, the agony of undergoing forceful guilt…is beautifully and subtly captured in the movie.

The movie begins with a scene situated in Benaras (Varanasi) where Murad Ali’s (Rishi Kapoor) family is all-merry, celebrating with neighbours of all faiths. The decades of bonhomie between Murad Ali and his Hindu friends, Chaubey and Kanhaiya has been depicted. They eat & dance together and share happiness and sorrows with each other unless and until a shocking event occurs and changes their lives. The family’s youngest son, Shahid Mohammed (Prateik Babbar) gets involved in terrorist activities which results into a bomb blast, killing many. The situation turns chaotic when he refuses to surrender to the police and he is encountered by a Muslim officer, Danish Jawed (Rajat Kapoor). The entire incident takes a toll on the life of his family which is driven into a vicious trap after heinous charges are slapped on them. Bilal Mohammed (Manoj Pahwa), Shahid’s father, is taken into police custody under suspicion of having a hand in terrorist attack. Post-incident, their friends-cum-neighbours start exhibiting a cold behaviour towards them. His daughter-in-law, Aarti Mohammed (Taapsee Pannu), a Hindu, takes up his case and leaves no stone unturned to prove the family innocent.

Mulk narrates a painful story. At times, eyes get filled with tears. The movie revolves around how the family struggles to defend itself to prove themselves innocent and nationalist. It attempts to challenge the general perception with regard to the Muslim community…to prove that they are as loyal and patriotic as anybody else in the country.
The questions raised by public prosecutor, Santosh Rana (Ashutosh Rana) has an uncanny resemblance with what a common Muslim has to undergo in his everyday life. Pertinent enough to knock the sealed ears of majority of us, arguments put forward by Aarti Mohammed are brilliant.

Three kudos to the cast!! While Rishi Kapoor has outperformed every other character in the movie, Manoj Pahwa, Taapsee Pannu, Neena Gupta have delivered riveting performances in their respective roles. As the movie progresses, one realises that Anubhav Sinha is one of the directors that are bold enough to express their minds without any filtering. The movie embarks you on a journey intertwined with a range of emotions – from anguish to sympathy.

Rishi Kapoor fits in his role flawlessly. The questions Aarti, the defence lawyer raises in the courtroom are relevant. At one point, she asks Murad Ali to prove his love and loyalty for the country despite him being an honest man throughout his life. Murad Ali emotively makes a substantial argument, “Nobody has the right to welcome me in my own home…this country is mine as much as it is yours!” The confusions he has in his mind are actually the demanding questions which each one of us needs to answer. “Koi apni mohabbat kaise saabit kare???”(How to prove one’s love) makes one introspect and empathise with them. “Pakistan jao”(Go to Pakistan), written by some fringe elements on the wall of his home is woeful.

Notable is the character of the ATS chief, Danish Jawed (Rajat Kapoor), whose has a preconceived notion in his mind that all terrorists are Muslims. Apart from his character, how the mother of Shahid refuses to accept her son’s dead body is moving.

It is disheartening to see so many of us stuck on the pages of partition even after seven decades of independence. Indian Muslims have chosen India as their country over religion (“Mulk aur Mazhab mein Mulk chuna hai”). Pakistan is a different country. What is the bizarre logic behind leaving our nation?? When you call a person ‘Pakistani’, you dishonour him and the ideals of the country.

It also showcases how terms like ‘Jihad’ have been misinterpreted. Murad Ali explains the meaning of Jihad to be a ‘struggle against evil with us’…

Mulk, aptly, highlights the politicisation of terrorism and that terror has no religion, no country. It stresses upon how common people fall prey to divisive political agendas, how polarisation is benefiting some and looting the peace and stability of the country. It is a perfect courtroom drama which makes the viewer contemplate about the Islamophobia which is quite prevalent these days across the globe.

The beauty of a democratic nation like ours is to agree to disagree. The problem is we have lost our tolerance to dissent. It is either ‘my way or no way’. This is highly disastrous for a country like India whose very foundations are laid in ‘unity in diversity’. Undoubtedly, country is first. Every other thing is secondary. But certification of nationalism is unacceptable. These fringe groups have no authority to do so. This country is governed by Rule of Law and not by Rule of Men. Such jungle raj will drag us backward. Law of the land should and must be supreme.

Watching this movie, fills me with agony, pain and empathy. The need of the hour is each one of us understands that questioning somebody’s loyalty towards their country is an insult in itself. It is the very injustice and intolerance which nurtures hatred and prepares fecund and fertile grounds for radicalists to hire the youth to carry out terror activities. Also, important is to note that terrorism is a problem without passport. It is a global challenge. It must not be coloured with any religion or nation. The definition of ‘terrorism’ doesn’t include any religion. This must be remembered at all times.

The most praiseworthy part of the movie is the court’s verdict. The honourable judge asks Murad Ali to not be hurt each time his patriotism is questioned. Rather he must gift a book called “Constitution” to him, the book which lays down equality in all spheres for all citizens of the country.However, there’s a missing element I found in the movie. Several times, false charges are pressed against innocents without any clear evidence and investigation. The recent incident of Amir who was recently, released after 14 years of police custody must also be shown.

When I say, “I love my country”, it is not the plains, mountains and rivers. Rather, it the countrymen. It is a commitment to love and protect each other, to remove the barriers between “us” and “them”, to be loyal to the country and render services in times of need. It is high time to revisit the Preamble of the Constitution and live up to its expectations.

The theme, dialogues, performances are impeccable. With our 71st Independence Day about to be celebrated in a few days, timing of the movie is appreciable. All in all, the movie is a must watch.

(Areeba  can be contacted at Email: areeba.aspire@gmail.com)