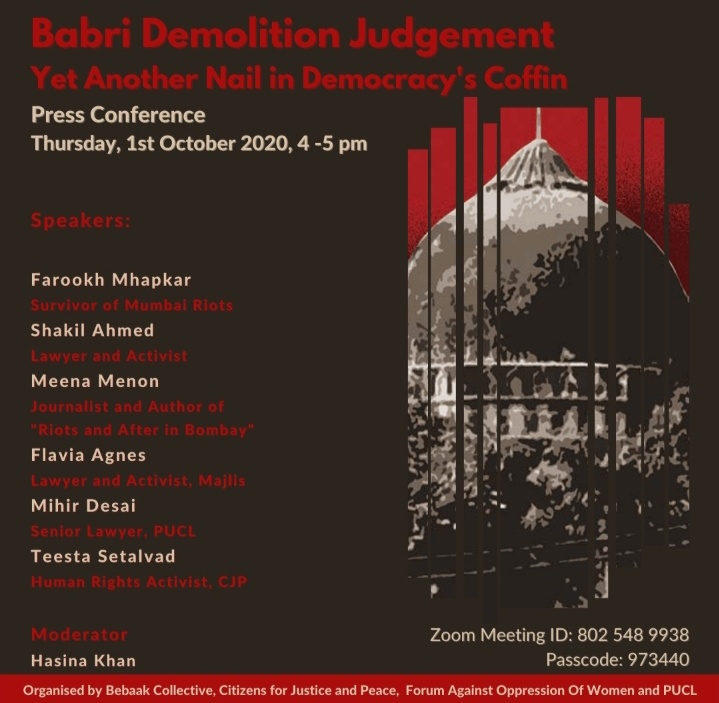 Mumbai: Activists and feminists from Mumbai on Wednesday joined the wider Indian human rights and minority community in condemning, outright, the travesty of a Judgement in the Babri Masjid demolition criminal case. They demanded that the CBI must appeal against the judgment in the higher court.

In a statement, they said, “Not only have none of the 32 accused been found guilty, most of whom are prominent players in the current ruling political dispensation in both Delhi and the state of Uttar Pradesh, but the sheer delay in pronouncement of this verdict makes it a sham on the due process of law. Hard documentary evidence as also powerful witness testimonies from those present, including police officials, have been willfully ignored. There are Videos and Photos of the Demolition, the “leaders” who today claim they are vindicated, have been seen and heard provoking mobs and leading sustained mass campaigns that ensured the demolition did happen. To say that this verdict is the latest in many to spell a death knell for Constitutional Law, Morality and the Rule of Law would not be an exaggeration.”

It further stated that, “We would like to remind all Indians that the entire campaign that led to the demolition of the Babri Masjid, not only let loose a particularly genocidal character of communal violence where Muslims became repeatedly the target (be it Meerut-Hashimpur, 1997, Bhagalpur, 1989, Ahmedabad, Hubli, Bhiwandi-Bombay, Jaipur among only some instances) but Advani’s rath yatra made it abundantly clear that he was not carrying a message of peace. Pictures of him carrying a trishul, an axe, a sword and a bow and arrow were constant.  A systematic demonization campaign against Indian Muslims, manipulating history and militarizing Lord Ram was employed.”

Among the telling eye witness accounts –including the one by Ruchira Gupta, then with the Business India magazine—was the one by CRPF woman personnel, Anju Gupta.

“On December 6, 1992 Advani made a spirited speech from the Ram Katha Kunj Manch, barely 150-200 metres from the Babri masjid site, which charged the people. He repeatedly said that the temple would be constructed at the same site,” Gupta told the trial court. She also said that when the “kar sevaks” began demolishing the Babri Masjid none of the BJP leaders who were present, including Advani, made any efforts to stop them. Once the mosque was demolished, the BJP leaders distributed sweets, according to Gupta’s testimony. Despite all this, we have a verdict that has shattered the faith of common Indians.

LK Advani and several others, including Murli Manohar Joshi, who were charged with criminal conspiracy enjoy the impunity provided by a government determined to protect the perpetrators of this Violent and Criminal act.

Activists noted that it was under the first NDA government in 2001, that the Allahabad high court dropped the charge of criminal conspiracy in this case: the charge was restored by the Supreme Court in 2017, which described the act of demolishing the mosque as a crime that shaken the ‘secular fabric of the Constitution’. But for the intervention of the Supreme Court the trial would not have reached completion.

They also underlined that the Indian Muslim community, the specific target of not just bloodletting but a sustained other-ing campaign that seeks to render it to nothing less than second class status, has reposed faith in the Constitution and democracy when the nation including the Judiciary has failed them, since December 6, 1992.

Prominent activists lauded that despite  these horrible incidents   Indian Muslims have, in large measure, demonstrated patience nationwide, when Supreme Court, in a questionable verdict, while recognizing the “crime committed on December 6, 1992” awarded the land on which the demolished Babri Masjid once stood a section of Hindus that have agitated this violent agitation.

Tragically Wednesday’s decision is in line with a long line of judicial pronouncements that has betrayed Constitutional and criminal law, let down the faith of the most marginalized in India’s secular democratic stricture, they added.

Way back in 1994, the words of a five-member bench of the Supreme Court are telling. Calling the demolition “National Shame’, the Court had said that the criminal act shook the ‘faith in the rule of law and constitutional processes. A five-hundred-year-old structure which was defenceless and whose safety was a sacred trust in the hands of the State Government was demolished’.

They also addressed a press conference via zoom on Thursday evening.