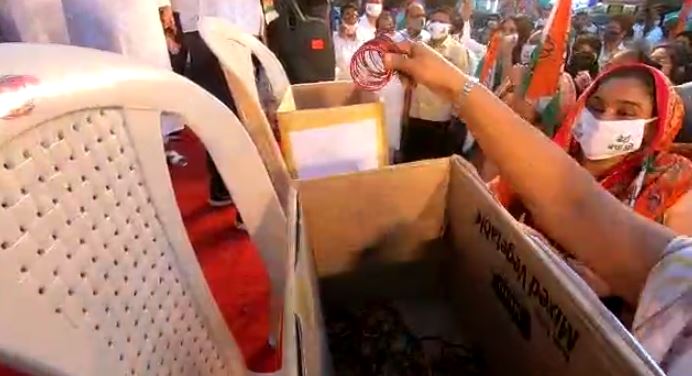 Scores of women, who participated in a Congress party-led protest in Mumbai’s Mira-Bhayandar locality on Monday, decided to send bangles to Prime Minister Narendra and Uttar Pradesh chief minister Yogi Adityanath as a mark of protest against their failure to stop growing crimes and human rights violations.

In a video that has emerged on social media, women can be seen putting their bangles in two cartoons. “This is for Modi and this is for Yogi,” a woman is heard saying in the video.

The development comes amid ongoing protests against the Uttar Pradesh government in connection with the Hathras gang-rape incident.

On 14 September, a 19-year-old Dalit woman was allegedly gang-raped in Uttar Pradesh’s Hathras district by several men. She died at Delhi’s Safdarjung hospital on 29 September and her body was cremated by police officers, allegedly without her family’s consent.