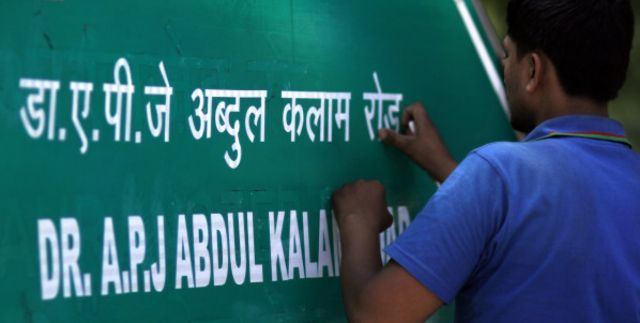 Mumbai : A prominent school in the eastern suburbs of Mumbai will be renamed after late President A.P.J. Abdul Kalam on the occasion of his 87th birth anniversary on October 15, an official said here on Wednesday.

The school in Ghatkopar suburb run by the North Mumbai Welfare Society (NMWS) recently merged with the South Indian Education Society (SIES), Matunga, and shall now be known as “SIES Dr APJ Abdul Kalam Memorial High School”, said a trustee of the SIES.

Maharashtra Chief Minister Devendra Fadnavis will do the honours at the renaming ceremony and also a life-size statue of Kalam will be installed in the school premises on October 15.

Kalam, a renowned scientist, was the President of India between 2002-2007. He was conferred the country’s highest civilian honour Bharat Ratna in 1997. He passed away after a cardiac arrest in Shillong, Meghalaya, on July 27, 2015.

To mark his 87th birth anniversary celebrations, Fadnavis will inaugurate an exhibition “India At 70” comprising 70 panels depicting least known facts about India, things India has given to the world, what India has to do to become a developed nation, to make a modern India and the great achievers of India.

Among the oldest educational institutions in Mumbai, the SIES has several schools and colleges with a student strength of around 25,000.

The newly-merged NMWS, Ghatkopar, has been in the education sector since 55 years with a student strength of 3,250.

“In his honour and memory, and in acknowledgement of the significant contributions he had made to ignite young minds, we have decided to rename the newly-acquired NMWS after him,” said SIES President V. Shankar.

In the past, satellite stations, roads, educational programmes, a bacteria (Solibacillus Kalami by NASA) and others have been named in his honour, but this is probably the only educational institution to name a school after Kalam who was very of fond of children, Shankar said.

Interestingly, Kalam was the Principal Patron of SIES which he visited on several occasions and was also honoured with the “SIES Life Time Achievements Award” and “Sri Chandrasekharendra Saraswati National Eminence Award”, said SIES spokesperson K. A. Vishwanathan.

Fadnavis will be received by 87 school students along with a guard of honour to be presented by the school NCC. Another group of 87 students will lead an oath to “make India a most formidable nation in three decades from now”.