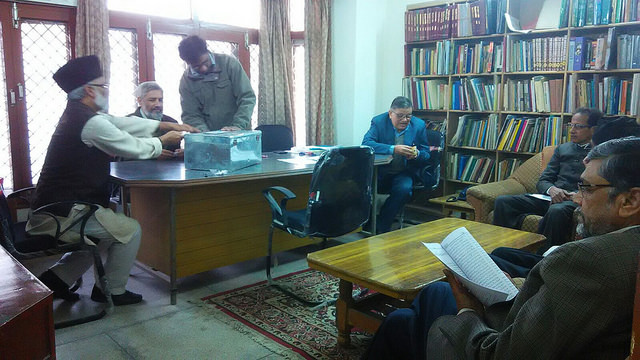 New Delhi: AIMMM has elected its president and 20 members of the Markazi Majlis-e-Amla (Central Working Committee) of AIMMM for the term 2016-2017 Navaid Hamid has been declared the new president of this 50 years old Muslim body.

Mr Hamid has defeated his nearest rival by a margin of five votes. Of the 144 votes polled, Hamid got 52 votes, while the other two competitors, Manzoor Ahmed and Mohammad Adeeb, got 47 and 45 votes respectively.

Mushawarat was founded by luminaries of the Indian Muslim community on 8-9 August 1964 in a response to a series of major communal riots at that time and has several leading Muslim bodies as its member organizations such as Jamat-e-Islami Hind, All India Jamiat Ahle Hadis, All India Shia Conference, Indian Union Muslim League, Indian National League, All India Momin Conference, South Asian Muslim Lawyers Association, UP Rabita Committee and the like.

Navaid Hamid has been elected as the President of the AIMMM for a term of two years, ending on 31 December 2017.

The elected president of the leading Muslim organization assured just after the declaration that his priority will be to consolidate the Muslim leadership with better coordination among its constituents and establish its organizational base in so far left out states.

Navaid Hamid, a resident of old Delhi, is a socio-political activist and minorities rights worker and associated with a number of national and international organizations.

He succeeds Dr Zafarul Islam Khan and will take charge as the 7th president of this 50 year old apex body of Indian Muslims, which recently observed its golden jubilee function graced by the Vice-President of India Hamid Ansari.

According to the AIMMM constitution, the president and the newly elected central executive committee will jointly appoint other office bearers shortly. Additional members of the committee, maximum 10, may be nominated by the president after taking the charge as per the traditions of the Mushawarat.