New Delhi: The All India Muslim Personal Law Board (AIMPLB) said on Friday that it will file an appeal against the Karnataka High Court’s Hijab judgement before the Supreme Court. Expressing deep unhappiness over the verdict, it said there is now a growing sense among Muslims that the courts are also becoming prejudiced in matters of sharia and religion, and often arbitrarily interpret constitutional provisions.

The Board, the premier body of Muslim religious academics from across India, including representation from all schools of Islamic thinking,  made the decision after an online meeting of its legal committee to review the Hijab verdict’s ramifications. 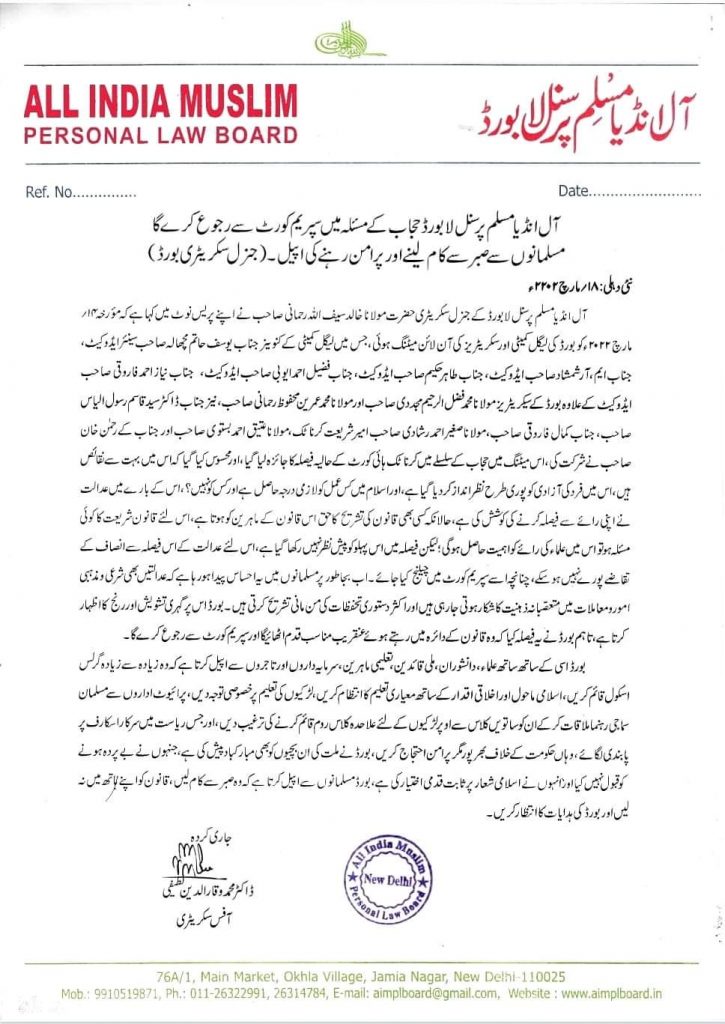 While urging the community to maintain peace, the Board also appeals to the community industrialists and businessmen to establish more girls’ schools across the country to ensure that girls receive quality education without jeopardising their religion, culture, or moral values.

Thousands of Muslim girls in schools and universities across Karnataka have been affected by the government’s decree and the high court’s subsequent decision, as the girls regard Hijab as a fundamental Islamic practise based on the Quran’s teachings.

On the High Court verdict, Board members made several observations.

First, the court completely ignored the right to individual liberty, and second, the court decided what is and is not fundamental in Islam on its own.

However, the Board members argue that the right to interpret and expound a law is reserved solely for specialists in that field. On a matter of Shariat or Islamic law, the board believes that the opinion of the Ulema or Islamic scholars will be more significant and convincing. The board members believed that the judges did not consider this factor when making their decision on Hijab.

The members of the committee opined that the high court had failed to meet the demand for justice in the case.

They felt that the court’s ruling on such a serious matter has led Muslims to assume that the court, which had been the last hope for people’s justice, is dwindling as well.

As a result, the board expressed its displeasure with the ruling of the High Court.

While maintaining within the bounds of the law, the Board declared that it will soon appeal the Karnataka high court’s decision to the Supreme Court.

The Board also asked the community to place a greater emphasis on girls’ education and to treat women with dignity and respect in society. Community leaders must approach private educational institutions and persuade their administrators to create separate classrooms for boys and girls in grades above Standard VII. Furthermore, the community must organise nonviolent protests in states where the wearing of the scarf is prohibited in educational institutions.

The board lauded the female students who refused to take off their Hijab and stuck to the Islamic symbols that are plainly stated in the Quran.

The board urged the Muslim community to maintain peace and calm, not to take the law into their own hands, and to wait for the Board’s instructions.