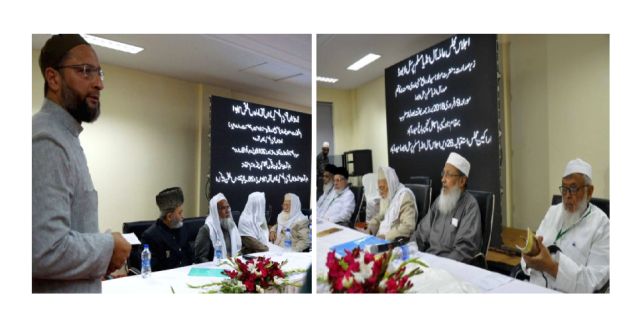 Hyderabad : The All India Muslim Personal Law Board (AIMPLB), the apex body of Indian Muslims, on Friday ruled out any compromise on Babri Masjid, rejecting a proposal by one of its members Maulana Salman Nadvi reportedly supporting construction of Ram temple at the disputed site in Ayodhya.

The Board announced after its executive meeting here on Friday night that there is no change in its stand that it is a mosque and when a mosque is constructed at a place, it remains a mosque till “qayamat” (the final judgement).

The land dedicated for mosque can’t be sold, gifted or in any way alienated, it said in a statement.

The Board said it never rejected the offers of conciliation by Hindu religious leaders and urged them to come forward with justifiable and honourable settlement. “However, they always had one answer that Muslims should unilaterally give up the mosque but Muslims can’t do this because giving a mosque for worship of anyone other than Allah is ‘haram’ and there is no scope for this in Shariat. If Muslims do this they will be accountable to Allah,” said the statement released in Urdu.

“The matter is in court. Board has taken a stand that it will accept the court verdict. The matter being heard in the court is not of belief but a matter of the right of ownership and hence there is hope that the verdict will be in line with the stand taken by Muslims. If this happens, this will neither be victory of anybody nor defeat of anybody. This will be the victory of justice,” said the statement read out by Board Secretary Umrain Mahfooz Rahmani.

“All the attempts to negotiate the settlements in past have been infructuous and there is no proposal offering settlement without sacrificing the basic tent has ever been put before the board,” it said.

The Board reiterated its resolutions passed in 1990 and 1993. The announcement came after over four-hour long meeting of the executive on the first day of the three-day plenary.

Salman Nadvi also attended the meeting presided over by the Board president Maulana Rabey Hasani Nadvi.

After a meeting with spiritual leader Sri Sri Ravi Shankar, Salman Nadvi reportedly favoured construction of Ram Mandir at the disputed site in Ayodhya. He also reported to have said that the mosque canAbe built on an alternative land near the disputed site.

Salman Nadvi gave a clarification in the Board’s executive meeting about his proposal. Sources said he was isolated over the issue in the meeting attended by majority of 50 executive members.

Owaisi told the media that the meeting unanimously reiterated its stand. He, however, declined to answer any queries.