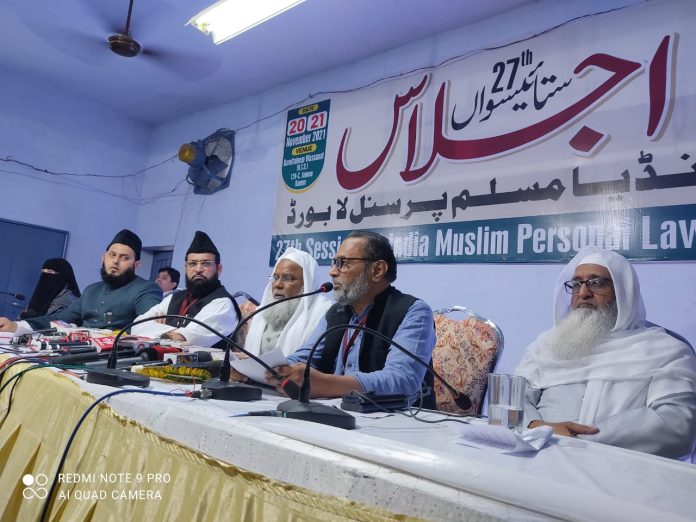 Kanpur/ New Delhi: Taking the strong note of growing incidences of disrespect to Prophet Muhammad (PUBH) in the country, All India Muslim Personal Law Board on Sunday demanded that the government should make blasphemy law in India. It also drew the attention of the government that any insult to the Prophet (PUBH) is bound to hurt the feelings of all Muslims the world over and it would tarnish the image of the country at international level particularly in Islamic world. At its 27th general body meeting, the Muslim Board also urged the government to desist from any attempt to impose the Uniform Civil Code (UCC) directly or indirectly, partially or fully, on the country as India is a multi-faith, multicultural nation and UCC is antithesis to the idea of India.

The meeting after deliberations for two day adopted as many as nine resolutions including on blasphemy, UCC, social media and other pressing issues and issued a declaration. Around 200 AIMPLB members attended the two-day convention.

The powerful body of Indian Muslims representing all schools of thought made a forceful demand that the government should punish duly those guilty of showing disrespect to the holy religious figures which is not only an offence committed against them, it also hurts the sentiments of millions of their followers. Since the advent of the BJP government, radical Hindutva elements including ‘Rabid priest’ Yati Narsinghanand Saraswati’ have been emboldened to openly insulting Prophet Muhammad (pbuh) and other religious leaders but the government did not act against such miscreants and even the police have been refusing to fileFIRs against them. In its resolution on blasphemy, the Muslim Board underscored that “India is a multi-faith country, inhabited by adherents of various faiths. They have been devoted to different religious figures. It has been a glorious tradition of our country that its people have made due allowance for the religious sentiments of other faiths. They have avoided committing any blasphemy or sacrilege against the Holy Scriptures and religious figures of other faiths. This tolerance has enriched the tradition of unity in diversity”. And added that, “Esteemed Hindu, Sikh and other non-Muslim scholars have consistently acknowledged the greatness of Prophet Muhammad. By the same token, in line with the teachings of Islam, Muslims to have shunned attributing any offensive word about respectable figures of other religions”. It further underlined that the attitude of communal forces is totally unacceptable and the government is not acting against them who seem to enjoy impunity from the long hands of law. “It is, however, highly deplorable that of late some mischievous persons have openly insulted Prophet Muhammad (pbuh) where as government has not taken any deterrent step in this regard. This attitude of communal forces is totally unacceptable. This amounts to causing discord in the country and runs counter to the interests of nationalism and patriotism. Prophet Muhammad (pbuh) stands out as the leader and guide of Muslims across the world. Muslims hold him in greater love and esteem than anyone else; they prefer to sacrifice themselves for his sake. Any insult to him is bound to hurt the feelings of all Muslims the world over. It would tarnish the image of our country all over the world. Therefore this session demands the government to punish duly those guilty of showing this respect to the holy religious figures”.

The Board demanded that the government should enact effective legislation for tackling this sensitive issue.

On Common Civil Code, the Board said, “UCC is neither suitable nor useful for such a vast multi-religious country as India and it also goes against the fundamental rights guaranteed in India’s constitution.

“India is a multi-faith country, and every citizen is guaranteed to practice and profess his faith and religious beliefs, and to act on and preach the same. Uniform Civil Code is neither suitable nor useful for such a vast multi-religious country like India. Any attempt in this direction is discordant with the fundamental rights enshrined in our Constitution,” the resolution reads which passed on the second and final day of its 27th public session.

On the growing menace of social media, the Board noted that in the past few years “poisonous propaganda” has been carried out against Muslims. It sought “curbs against communal and hostile posts on social media and legal action against miscreants”. The board also asked the government and judiciary to refrain from interpreting Holy Scriptures; saying only religious authorities were eligible to do that. Referring to the arrests of some Muslim preachers including Maulana Kalim Siddiqui, Dr Umar Gautamin recent months, the Board said they were implicated in false cases of forced conversions even when the converts never made any complaint to police about being forced.

On Waqf, the Board said it is essential to clarify that once a Waqf (endowment) is made, it becomes the exclusive property of Allah so the person executing Waqf or any individual, group or government is not entitled to sale any waqf property or abuse its proceeds for any purpose other than that of waqf.

The Board session also expressed its deep concern over the rise in crimes against women. It asked the government to frame effective laws and ensure their implementation for the safety and security of women.

The meeting condemned the attacks on Hindus and their places of worship in Bangladesh, but it reminded that it is the basic duty of the state to protect minorities.

“In the recent past some temples of Hindu brethren were damaged in Bangladesh and Hindus were attacked there. It is a regrettable incident which is to be condemned.Indian Muslims have protested against it”. However, the Board said equally deplorable it is that Muslims were persecuted in Tripura. The State police colluded with rioters which is further victimization of Muslims. It betrays states’ negligence of its duty and its bias against minorities and Dalits.

“This representative body of Muslims urges the government to pay special attention to the atrocities against minorities, Dalits, weaker sections of society and women, and ensure safety and security for every citizen. It should devise effective ways and means for controlling the barbaric and inhuman incidence of mob lynching,” the resolution said.

The Board also exhorted Muslims to follow Shariah in their life, conduct inexpensive weddings, not demand any money from the bride’s family, shun extravagance, grant due share to women in inheritance and protect in particular the rights of their mothers sister, wife and daughter.

The 27th session of the Board appeals to Muslims and non-Muslims, particularly scholars and lawyers to grasp Islamic social law and its underlying wisdom.

Earlier on Saturday at the 27th General Body Meeting of the Board, Maulana Rabe Hasan Nadwi was re-elected as the president of the AIMPLB for a sixth consecutive term. Maulana Khalid Saifullah was formally elected general secretary who was made acting GS after the death of Maulana Wali Rahmani. Jamiat Ulema-e- Hind (A) president Maulana Arshad Madani and Prof (Dr) Syed Ali Mohammad Naqvi (Former Professor of Aligarh Muslim University) were elected vice-presidents.

Personal Law Board leaders to address Milad meet in Hyderabad