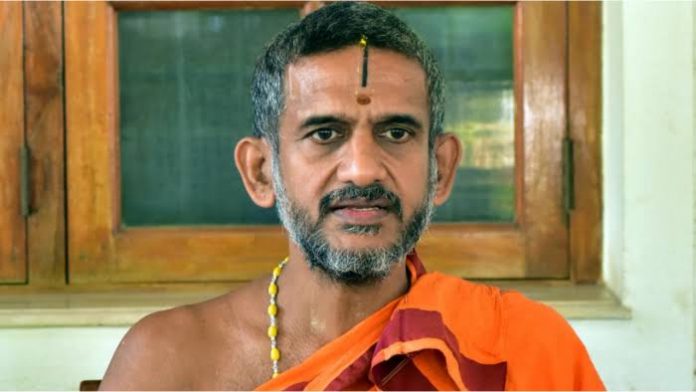 UDUPI : In an important development, a delegation of Muslim and Christian leaders, religious heads and traders, who are being prohibited in temple premises and religious fairs, on Wednesday met powerful Hindu Pejawar Mutt Vishwaprasanna Theertha Swamiji to seek his intervention.

They told Swamiji that the traders who make a living by selling items at the Hindu religious fairs are facing a lot of problems. They urged him to allow them to do businesses near the temples.

Vishwaprasanna Theertha Swamiji claimed that peace and harmony are important but it cannot be maintained by only one community. “Hindu community has suffered a lot for a long time. Many incidents have inflicted pain on the community. The problem can’t be solved by mutual discussions among a few religious leaders,” he stated.

The solution has to be sought at the grassroots level. When injustice has been meted out to a community for a long time, the anger explodes, the Pejawar seer said.

Abubakker Atradi, Honorary President of Udupi Consumer Forum said, a delegation met the religious seer with an intention to create peace and harmony in the society. Muslim community too wants peace. The whole community can’t be hated just because of one or two people. “We are like children of the same mother. I appeal that everyone should live harmoniously. Swamiji has given a suggestion to create a committee and assured of solution to the problem,” he explained.

He further said that no meeting was held within the Muslim community. The debate has gone too far. If statements are given according to somebody’s whims and fancies, the peace in the society will not exist. If there is love and affection, there will be no disturbance. It takes two to tango, he noted.

Shokamatha Igarji Church, Father Charles said, all live on the basis of certain values. Mistakes are committed by a few people. The mistake committed by one person is likely to put many into trouble. If these mistakes are rectified, there is a chance of harmony, he said. Religion is needed for all and at the same time discrimination among human beings on the basis of religion is wrong, he added. — IANS