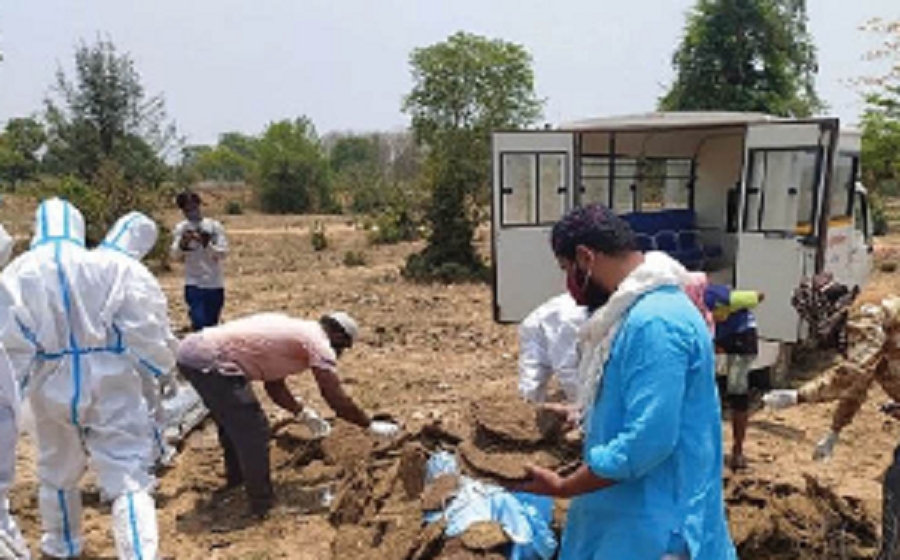 During the Covid-19 pandemic, volunteers of the Tamil Nadu Muslim Munnetra Kazhagam have come forward to bury people who died of Covid and whose family does not have the resources to conduct a decent funeral. Also, in certain cases, family members refuse to take the corpse to the crematorium fearing that they too will be infected.

According to the organisation office bearers, their 4,000 odd volunteers have helped to cremate and bury 2,064 people across the state from April 1 to May 25 as per the Covid protocols. During the first wave of the pandemic they conducted the funerals of 1,350 people.

The TMMK, an organisation fighting for the rights of Muslims in a democratic manner, has been involved in voluntary activities including blood donation and rendering service during the Tsunami.

Mujeeb Mohammed of Gumudipundi on the outskirts of Chennai who is a TMMK volunteer, told IANS, “The workers in the crematorium and burial grounds are fearful of contracting the virus on some occasions. We wear the PPE kits and observe the necessary sanitation, adhere to the Covid protocols and do the burial or cremation according to the religious beliefs of the deceased.”

In some cases wherein the deceased person’s family is not able to meet the expenses of the funeral and also to pay the charges of the ambulance the organization chips in and provides every help they can.

TMMK state secretary Ejaz Ahmad while speaking to IANS said, “I am now familiar with the funeral customs of other religions after volunteering to cremate or bury the Covid -19 victims.”

In certain cases the family members of the deceased do not want to touch the body or carry it to the funeral ground and here also TMMK volunteers take this forward.

Nizamuddin, a volunteer of the organization based in Dharmapuri, Salem told IANS, “We have seen several tragic scenes wherein the family members don’t venture out to take the body of the deceased to the funeral ground. They are worried that they may contract the disease and we were forced to perform the last rites and services with tears in our eyes. I am also familiar with the customs of both Hindus and Christians after doing the cremation and burials during the first and second wave of the pandemic.” — IANS

How can ‘unrepresentative’ UNSC deter crimes against humanity: India