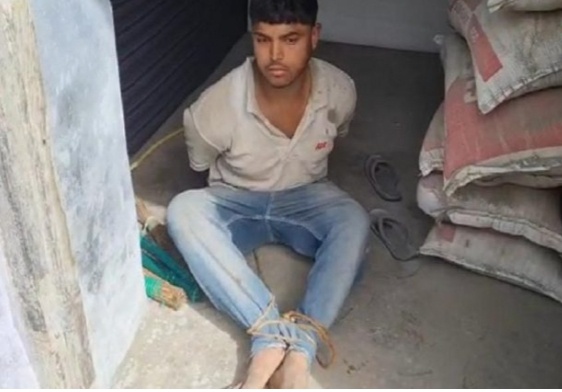 ”The temple’s priest was talking about cutting my nails and fingers and burning my body at a cremation ground,” said Danish.

New Delhi: A group of Hindutva fanatics thrashed a labourer identified as Danish in a temple in Uttar Pradesh’s Etawah district. They tied him with a rope and thrashed with pipes.

Local BJP leader Shailendra Verma was purportedly involved in the attack, according to News 18 Hindi report.

Danish says he was working as a labourer at the temple. Everything was fine until his name was revealed to people managing construction work at the temple.

When he asked for the payment he was called to a room and asked to tell his name. When he said he was Danish, they asked, ”are you a Muslim?. After that, they locked the main door, tied me with ropes and started beating with pipes,” he said while speaking to a local media outlet called Tejas News.

They accused him of stealing in the temple to justify their act.

He was freed after the police and his relatives reached the spot.

”The temple’s priest was talking about cutting my nails and fingers and burning my body at a cremation ground,” said Danish.