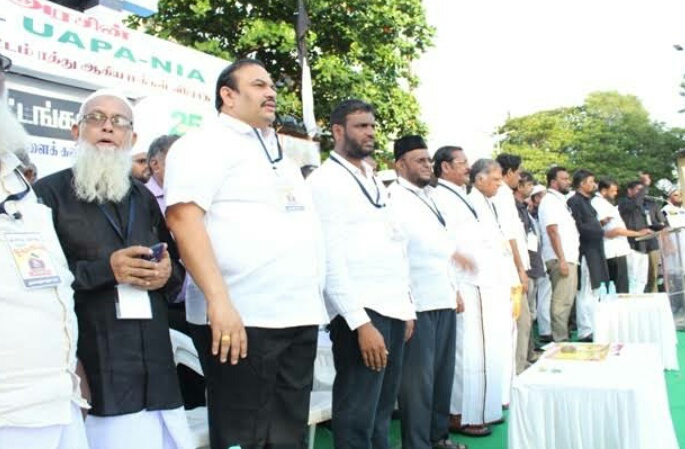 Chennai:  On the completion of its 25 years existence, the leading Muslim political force in the southern state of Tamil Nadu, Tamilnadu Muslim Munnetra Kazhagam (TMMK) on Sunday celebrated its Silver Jubilee functions.  TMMK, which in English translates as the Tamilnadu Muslim Progressive League, came into existence on September6, 1995.

Since its inception  TMMK fought for the rights of Muslims and the downtrodden people in the state dominated by two grand Dravidian parties, DMK and AIDMK.

However, due to the corona pandemic situation the silver jubilee celebrations were limited in the form of conference via web organized by Secretary Haja Kani and President MH Jawahirullah where many leaders spoke behind webcams including the opposition leader and DMK president MK Stalin.

TMMK was established in 1995 as a progressive league to protect Muslim identity and development of Muslims in democratic manner. TMMK has its branch offices in all the districts of Tamil Nadu and in several villages of the state. It also has its foreign offices in Malaysia, Kuwait, Saudi Arabia and other gulf countries have more than 1 lakh members.

TMMK is also do social and relief work. It  was involved in Tsunami relief work and does social services including blood donation camps, eye camps and free ambulance services to poor and many more. The secretary of TMMK Haja Kani and President MH Jawahirullah organized celebration via web.

In the key note address Jawahirullah says “We are pleased to announce that the TMMK which was launched on August 25, 1995 and celebrates its anniversary in 2020 is completing a quarter of a century in its journey to defend the rights of the oppressed people. Chennai Nandanam YMCA was expected be part of the celebrations this Friday. It was planned to hold a grand convention at the stadium. However, due to the spread of coronal disease and the public health concerns, it was decided to hold the conference via the Internet”.

Addressing the celebrations via video conferencing , DMK president M. K. Stalin said that religious fundamentalist groups are portraying his party as an enemy of Hindus because it stands for the rights of the minorities.

“The DMK will stand by your side in the fight for your rights. All religions are agreeable to us, and we are only against religious fundamentalism. Our enemies are those who use religion for politics.” he added.

Since this celebratory event happened right few months away from the TN legislative election to take place in early 2021, the alliance between Dravida Munnetra Kazhagam and Manithaneya Makkalkatchihas become even stronger along with their other friendly parties in a motive to win the upcoming TN legislative elections.

The intention of Sangh is not to protect temples, but to gain political mileage: TMMK president M Jawahirullah

Muslim NGO helps to bury or cremate over 2,170 Covid victims