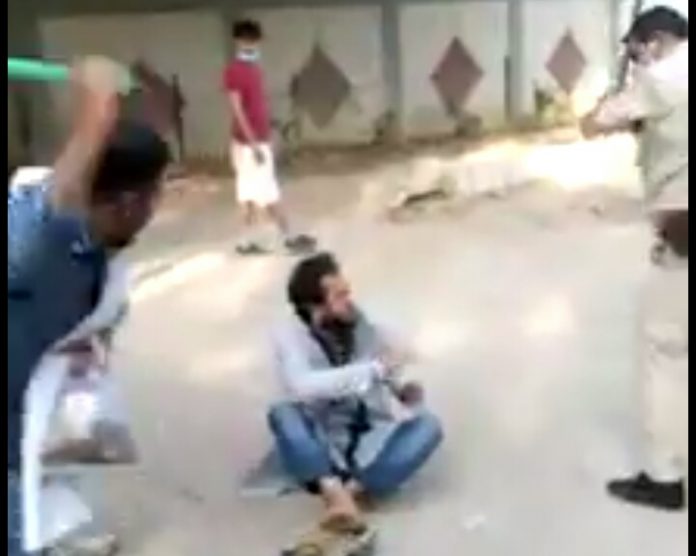 New Delhi, Apr 8 : A Muslim man  was beaten by a policeman and a several other individuals in Sagarpur colony of South West Delhi. In a video that has gone viral, the man is seen being chased by the assailants and later hounded by them.

TuIn a tweet, Delhi MLA Amanatullah Khan has identified the victims as Imran and the policeman as Kamlesh who is appointed at Sagarpur police station. Khan alleged he had a conversation with Imran and he was told by him that the police have not taken action against the assailants despite his complaint application.

According to a news report by Press Trust of India (PTI), the policeman has been suspended. The report quoted an unnamed senior police officials saying that a departmental inquiry has been initiated in the matter.

The PTI report further quoted victim’s family members telling that he had gone to a mosque after which he went to his elder sister’s house, who also lived in the same locality.

“The policeman followed him and started thrashing him. They alleged that he had coronavirus. People also joined the policeman in hitting him. Imran does not have coronavirus, but even if he did, the police should have taken him to a hospital for treatment and informed us,” one of Imran’s family members said.

The incident took place in the wake of a rise in hate campaign promoted by India’s right-wing machinery, apparently backed by members of ruling Bharatiya Janata Party in connection with the spread of COVID-19 in India. The hate campaign has resulted in various incidents of discrimination against and attacks on Muslims.