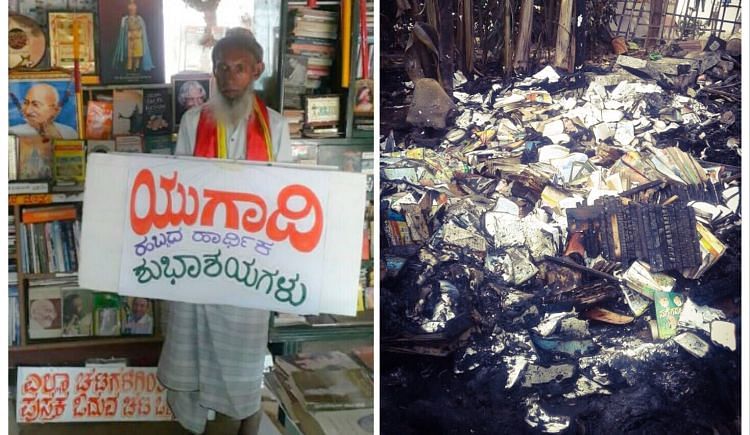 New Delhi: Miscreants burnt a library run by a 62-year-old daily wage in Mysuru city of Karnataka on Friday. There were over 11,000 books in the library, including 3000 beautiful copies of the Bhagavad Gita, over a 1000 copies of the Holy Quran and Bible, reported The Indian Express.

The library run by Syed Isaaq has provided free access to books for the residents of the Rajiv Nagar and Shanti Nagar areas in Mysuru for the past 10 years.

“It was in the wee hours of the morning that a man living near the library premises informed me that a fire had broken out inside. But it was too late when I got there. I could do nothing but stand there helplessly as the flames only got higher & engulfed the whole building”, Syed Isaaq says.

Deprived of education, Isaaq worked as a bonded labourer before turning into an Under Ground Drainage (UGD) cleaner and did odd jobs to earn a livelihood.

He wanted others to read and learn Kannada and with this noble intent, he had started this library, which unfortunately now has been completely burnt down.

Nearly 85% of the books in his library collection were Kannada while several were English and Urdu. “The library had over 3,000 exquisite collections of Bhagavad Gita, over a 1,000 copies of Quran and Bible besides thousands of books of various genres which I sourced from donors,” he says.

Though he did not spend money from his pocket, he used to spend nearly Rs 6,000 for the maintenance of the library and on the purchase of newspapers.

Following this incident, Isaaq approached the Udayagiri police station and lodged a complaint against the miscreants. Police have filed an FIR under the IPC section 436 and have launched an operation to nab the culprits.

However, the incident has not broken Isaaq’s determination. He aim to rebuild the library.

A fundraiser campaign has been started on ketto.org to help reconstruction of the library.