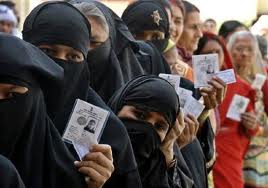 New Delhi, April 17 : Six decades after India’s partition made Muslim politics a dirty word, parties founded by Muslims to espouse the cause of the country’s largest minority are again making a mark.

And with national elections barely a year away, leaders of these 10-odd parties – some of which remain largely unknown – point out that the mobilisation of Muslim votes must not be compared with the pre-1947 politics that led to Pakistan. They say they are only articulating the aspirations and also the anger among Muslims over their widely admitted socio-economic backwardness as well as “police high-handedness” after every terror attack.

“Muslims are not satisfied with any mainstream political party,” explained Abdul Raheem Qureshi, president of Majlis Tameer-e-Millat, a five-decade-old socio-religious group in Hyderabad.

“All the parties have failed to reflect the community’s aspirations in parliament and in state assemblies,” Qureshi told IANS, reflecting a widely held view. “But this is not a repeat of history.”

He and many others say there is nothing wrong in forming parties to secure the rights and the due share of every community, religious or otherwise. Muslims account for 14 percent of Hindu-dominated India. Their numbers, according to various reports, range from 150 to 177 million.

On paper, all the so-called Muslim parties are secular and don’t close their doors to non-Muslims. Most also don’t restrict themselves to just espousing the Muslim cause and take up other issues as well. Equally true in a country as varied as India, the majority of Muslims in India still vote for national and regional parties.

Only Jammu and Kashmir state – out of India’s 28 states and seven union territories – is a Muslim majority one.

Once the Muslim League died a political death in India following the creation of Pakistan, the Indian Union Muslim League (IUML) emerged in 1948. Today, it is a mainstream player in Kerala.

The Hyderabad-based Majlis-e-Ittehadul Muslimeen (MIM) was born in 1928 with a view to keeping Hyderabad independent. It was outlawed after India’s independence but got revived in 1958.

For decades, these were the only two Muslim parties in India and both had localised influence. The picture is changing – slowly.

In just six years after taking birth in 2005, the All India United Democratic Front (AIUDF) became the main opposition party in Assam, eroding the Muslim base of the Congress and others.

With 34 percent of Muslim population in Assam, AIUDF legislator Sirajuddin Ajmal told IANS with confidence that his party would form the next government in the state.

Two other parties – the Welfare Party of India and the Social Democratic Party of India – stunned pundits by winning over 66,000 votes in the Jangipur Lok Sabha constituency last year. President Pranab Mukherjee’s son Abhijit then scraped through by only 1,516 votes over his CPI-M rival.

In Tamil Nadu, the IUML has always been a fringe player, aligned mostly with the DMK. A new Muslim party, Manithaneya Makkal Katchi (MMK), was formed in 2009 and is now with the ruling AIADMK.

The growing number of Muslim political parties “is a natural consequence of democracy”, MMK legislator M.H. Jawahirullah told IANS. He called for coordination of all Muslim groups in India.

With a scattered and largely urbanized 12 percent Muslim population in Maharashtra, the Aurangabad-based Jamaat-e-Islami has not won any seat in the elections it has fought.

The dwindling Muslim representation in parliament and state assemblies in most places worries Muslim leaders nationally.

In Uttar Pradesh, the All India Ulema Council was formed in 2009 but it failed to make any impact beyond Azamgarh district.

The Peace Party, formed later, created a stir in Uttar Pradesh ahead of the 2012 elections. It won three seats but was routed in 193 seats.

Activist Naiyar Fatmi said in Patna that while there was no scope for a Muslim party in Bihar, “on the national level there may be”. He added that Muslims were frustrated with major political parties.

Added Asghar Nawaz Khan, a leading Muslim leader in Bangalore: “Yes, we are disenchanted by the mainstream parties because we do not matter to them except during elections.”

Rashool Abdul of Muttahida Muslim Mahaz, a socio-religious outfit in Karnataka, complained: “We did not get any support from the Congress or JD-S when young Muslims were harassed or arrested on false charges.”

This is a recurring theme in state after state, even where no Muslim parties exist.

In Kerala, where Muslims form a quarter of the population, besides the IUML, two other community-based parties exist: Indian National League and People’s Democratic Party.

IUML legislator K.N.A. Khader said major issues facing the minority communities in other parts of India were not getting addressed because of “the absence of a political party which works for them”.

The IUML is trying to foray into neighbouring Karnataka while the MIM has expanded in other parts of Andhra Pradesh and also in Karnataka and Maharashtra, winning municipal seats here and there.

In Uttar Pradesh, most Muslims now tend to vote for the Samajwadi Party and the Bahujan Samaj Party, a far cry from the times when they all rooted for the Congress.

In Jammu and Kashmir, the story is more of alienation with the Indian state than any resurgence of Muslim identity.

In some states, however, there is nothing resembling Muslim politics though disaffection within the community exists everywhere. This has also led to the rise of radical Islam in parts of India.

But as community leaders point out, the Indian Muslim is not a monolithic entity. Like the Hindu, he is divided into many groups.

Despite recurring communal riots post-1947, the first major convulsion in the Indian Muslim political psyche followed the razing of the Babri mosque in Ayodhya in 1992 and the 2002 Gujarat violence.

Not every Muslim is for religious identity in politics.

“India is a secular country. Why should there be a separate party based on religion?” asked Abdul Kareem of the Goa Muslim Association.

Abid Rasool Khan, general secretary of the Congress in Andhra Pradesh, warned: “If there is polarization of the Muslim community, other communities will also polarize, which will be disastrous.”

A list of political parties espousing the cause of the Muslim community among other issues:

(M.R. Narayan Swamy can be contacted at narayan.swamy@ians.in)—IANS.