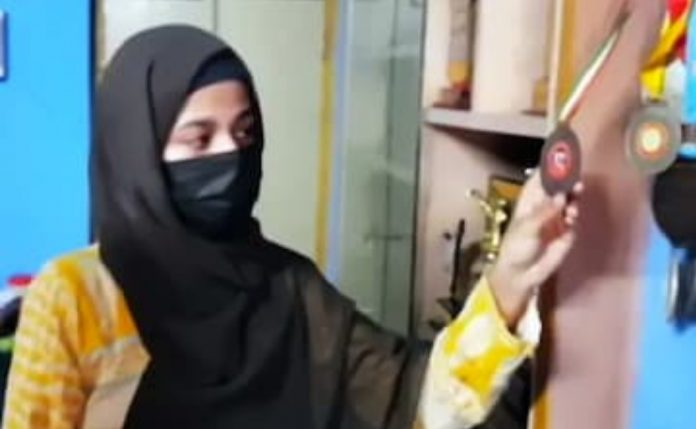 In the battle against the Hijab ban, a 17-year-old girl in Karnataka, Aliya Assadi, made a fresh appeal to the Chief Minister Basavaraj Bommai to stop their future from getting ruined.

Assadi said the ban on hijab will affect many students who want to appear in the Pre-University exams scheduled later this month.

“You still have a chance to stop our future from getting ruined. You can make a decision to allow us to write exams wearing hijab. Please consider this. We are the future of this country,” tweeted Aliya Assadi, who is a state-level Karate champion, tagging Mr Bommai.

Aaliya Assadi is one of the eight girls in the forefront of the Karnataka hijab row who was barred from entering college wearing her hijab.

Aliya Assadi is also one of the petitioners having approached the court against the state’s hijab ban.

After the Karnataka High Court’s verdict of uphelding the hijab ban, they have now pinned their hopes on the Supreme Court.

The Supreme Court has refused to accord an urgent hearing on the pleas challenging the High Court verdict.

On March 15, the Karnataka High Court dismissed the petitions seeking permission to wear hijab in the classroom.

Upholding the state ban, the court said that wearing a hijab “is not an essential religious practice of Islam” and that the uniform dress rule should be followed in educational institutions where it has been prescribed.

Previous month, in the wake of Hijab ban, more than 40 Muslim girl students from Udupi in coastal Karnataka didn’t appear in the first pre-university examination.

Those girls are also involved in the legal fight over the wearing of hijab in classrooms.