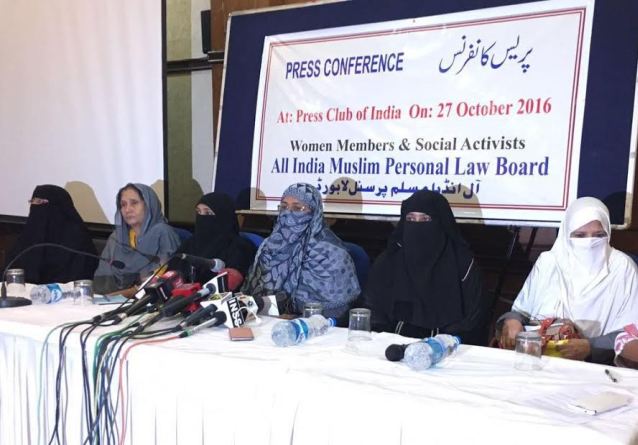 New Delhi: Muslim women today rejected Prime Minister Narendra Modi’s offer of providing justice to them, and asked him if he is really concerned about Muslim women then secure justice for Zakia Jaffrey, the widow of slain former MP, Ehsan Jafffey. They also said the PM should focus on other burning issues confronting the common masses adding that  the Muslim women are totally secured under the Shariah Laws and have got the rights which no other religion has provided to the women.

Addressing a presser at the Press Club of India here, Muslim women from various walks of life, school of thoughts and organizations asked the Modi government to focus on education, health, inflation and other real issues confronting the masses for bringing “ache din’ as promised in BJP’s poll manifesto. It is unfortunate, for petty political gains and diverting attention from its failure, the Modi government is interfering in internal religious matter of a community.

“People who have got only lip service for the gender justice and gender equality is intentionally or unintentionally falling into the trap of Uniform Civil Code which is the core agenda of the present day’s Government as has been mentioned in their manifesto”.

Dr. Asma Zehra, Member Executive – All India Muslim Personal Law Board, said triple talaq is not an issue but a manufactured issue raked up for diverting attention of the public from failure of the present government.  Opposing any ban on triple talaq, she said  that overwhelming majority of the Muslim women are totally satisfied with the marriage laws under Shariah and under no circumstances they would like any change in the same.

When asked about Msulim Mahila Andolan and others demanding ban on triple talaq and polygamy, Dr Asma Zehra quipped that these so-called Muslim women don’t know the ABCD of Shariah and they are raking up the issue at someone’s bidding.

“The community has one opinion on the subject and these women are free to adopt any law and we also want to make it clear that the all such activists who are bent upon bringing in the Uniform Civil Code by misrepresenting the facts to the nation will never succeed in their nefarious designs.”

Sharing her experiences at a Family Court in Jaipur, Mrs. Yasmeen Farooqui  from Women India, Rajasthan said Islam’s marriage laws are the best as  it is very difficult in non-Muslim societies  for a couple to get separated if they are not in a position to pull together properly.

In reply to a question, Atiya Siddiqui, Member of Jamaat Islami Hind said the new found love of the Prime Minister for Muslim women is amazing, he should first get justice to Zakia Jaffery who has been running from pillar to post since 2002 to get justice for her husband and Gulberg society residents who were brutally killed in Gujarat riots of 2002 when PM Modi was the chief minister of Gujarat. It is to be recalled that late Jaffery had made innumerable distress phone calls to Mr Modi and officials before being killed by the violent mob.

Woman representatives said: “It is amazing to note that Sangh Parivar is speaking in different voices. Whereas RSS says that Triple Talaq is an internal affair of the Muslims in the country, the Prime Minister has given an absolutely divergent affidavit without caring of 18 Crores of the Muslims who are also the proud citizens of this country and have complete faith in the constitution of India. It is sad that the Prime Minister has lowered his office by making it an election agenda”.

Leaving a poser to those who talks about the gender equality and gender justice:

They also asserted that divorce rate in Muslim society is very low in comparison to Hindus. There is no divorce registry in the country to present exact figures but stray figures reflect the reality.

“As the fact stands today, incidence of divorce among the Muslims is the least and same is the case of Polygamy but in spite of this it is projected that as if the Muslim men has no other job but to pronounce divorce”.

They underlined the fact polygamy is much prevalent in the Hindu society than in Muslims despite it is illegal act according Hindu Marriage laws.

The Muslim Second Wife enjoys all legal rights & Social Protection in Family & Religion. The real issue is of the “Mistress” & “Keeps” who are also women but do not get recognition as member of family & society in the other communities.”

They expressed the hope that the good sense will prevail on the government and the Prime Minister would be magnanimous in withdrawing its affidavit filed before the Supreme Court for the interference in the Shariah Laws.

They also claimed that Muslim Personal Law Board’s signature campaign is getting tremendous response to protect the shairah.