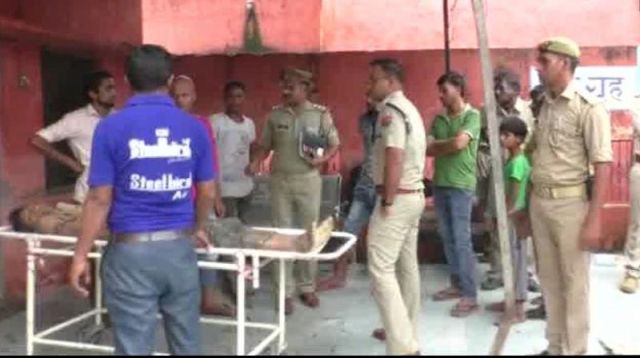 Lucknow : A man was beaten to death by a mob in Bareilly, Uttar Pradesh, early on Thursday on suspicion of stealing their cattle, police said.

The victim was identified as Shahrukh Khan (20), who worked as a tailor in Dubai and had come home for Eid.

The incident happened in Bholapur Hindoliya village where more than 50 persons attacked four young men when they found them in their cattle yard. The youths were thrashed by the mob and handed over to the police later.

The villagers have filed an FIR against Shahrukh and two others, alleging cattle theft.

Police say there were three persons in all who were involved in the theft of buffaloes from the cattle yard of a local Gajendra Pal. When they along with other neighbours Virendra, Khempal and Mukesh Kumar started a hunt for the missing buffaloes, they spotted these four young men trying to cross the Nakatiya river.

The other two alleged thieves Pappu and Abid of the Thiriya Nijawat Khan village knew how to swim and fled while Shahrukh was stranded on the banks.

Villagers attacked him and beat before handing him over to the police.

He was admitted to the district hospital around 7:30 am where he died in front of his family members and relatives. The post-mortem report has revealed that the 20-year-old died of internal injuries inflicted primarily to the liver and kidneys.

The victim’s family members have refuted charges of theft and informed the police that Shahrukh had gone out late night after receiving a phone call rom one of his local friends.

“The police informed us later about the incident. We found him in the district hospital,” a family member said.

There have since been two FIRs: one from Gajendra Pal, who alleged that his buffaloes were being stolen; and the other by family members against two dozen persons accusing them of mob lynching.

Western and central UP have witnessed a few similar cases of mob lynching sparked by cattle theft.

Anand Kumar, Additional Director General of Police (ADG, Law and Order) told IANS that he had sought a report on the incident. “I am awaiting details” he added.