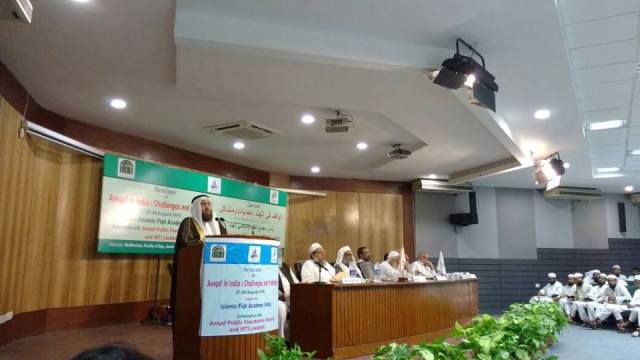 New Delhi:  Since independence of the country in 1947, Indian Muslims and their organizations have been struggling to save and protect the Waqf properties spread over the length and breadth of the country as more than 50 per cent of the properties (including in prime locations) are still in the illegal possessions of the Central and state governments’ agencies and departments. In view of this dismal scenario, Islamic jurists, experts, scholars, Uelama and  community leaders have vociferously demanded in one voice that Waqf management should be handed over to the community on the pattern of Shiromani Gurdwara Parbandhak Committee.

At the international seminar on ‘Awqaf in India: Challenges and Problems’ which concluded here at Jamia Millia Islamia, New Delhi on Sunday, delegates were of the opinion that until the present structure of Waqf management is not changed, the community cannot realize the potential of huge Waqf asset in the country.

In his opening remarks, Maulana Khalid Saifullah Rehmani, Secretary General of Islamic Fiqh Academy, said in the present Waqf Boards which run Waqf affairs, there are less elected Muslim members from the community than the nominated by the government. He suggested that if the community gets to run Waqf affairs without any government interference, then Muslims do not need any government help to move   forward. Tracing the origin of Waqf in the Indian Sub-continent, Maulana Rehmani said after the advent of Muhammad-bin-Qasim in 711, establishment of Waqf began in India.  He also pointed out three weaknesses in the newly amended Waqf Act, 2103: first the Government had promised that the Waqf property shall be regarded as public property at the time of evicting persons from the Waqf properties that have been encroached, but it was not provided in respect of the waqf. Second, in case of any dispute on Waqf property, there is no fixed time for the Tribunal to dispose of the Waqf cases, so arbitration period should be 6 months or maximum one year and if the Government acquires any Waqf land, it must pay its price at the market rate.  He suggested that the Waqf act must reflects the aspirations of the Muslim community.

Presiding over the inaugural session of the Seminar – organized by the Islamic Fiqh Academy in collaboration with Auqaf Public Foundation, Kuwait and Jeddah-based Islamic Institute for Research and Training, Jamiat-i-Ualma Hind president Maulana Arshad Madni said it is the just demand of Muslims that the government should hand over all the Waqf properties in its possession to the community. He said the Jamiat-i-Ualma Hind has been struggling since 1947 to retrieve the Waqf properties which were in adverse possession. He urged the community not to be disheartened with the present political situation in the country and to continue their struggle for getting back these properties which were bequeathed by their forefathers.

Echoing his views, ex-president of All India Muslim Majlis-e-Mushawarat and Editor Milli Gazette, Dr Zafarul Islam Khan said central and state governments’ agencies have usurped 60 to 70 per cent waqf properties and this encroachment trend began since the advent of British in India. He said successive governments had no good-intent about Waqf; otherwise it was not left the provision for eviction of unauthorized occupants in the just passed Waqf Amended Act in 2103. He suggested that the community should launch a mass movement for eviction of Waqf properties. He also suggested that Islamic seminaries should give due focus on Waqf subject in their syllabus.

In their papers, foreign scholars highlighted the Waqf activities in their respective countries.  Woman representative from the Awqaf Public Foundation, Kuwait Dr. Amal Husain Adalal said Kuwait has been doing excellent work in the development of waqf. She informed about experiences in the field of development of resources and investment. She asked the delegates to follow Kuwait model for development of waif as it is earning 4 million dollar annually from its waqf properties. It is really laudable that Kuwait is a tiny and prosperous country despite that it developed waqf properties to highest level.  The scholar from Bahrain Dr Habib Namality threw light on Waqf management in his country. He revealed that all waqfs in Bahrain are registered with Google mapping.

Dr Mohammad Ubaidullah, representative of IRTI, suggested that   India can take a cue from Singapore and Malaysia for developing waqf properties.

The 2-day seminar (on August 27, 28)  dwelt upon waqf related topics such as Indian History of Awqaf, India of Modern Age and Awqaf, Awqaf in Legislature and Judiciary and Monuments and Awqaf.

There were 53 papers presented on these topics. However, on Islamic monuments under the control of Archeological Survey India (ASI), the papers were not up to the mark as all papers lack incisiveness and hard stuff. It is a well-known fact that Archeological Survey India has completely failed to protect the sanctity of mosques under its control.  Taking the serious view of this, the seminar asked the government to hand over such mosques to local Muslim committees for their up keep. It also pointed out that Hindus were given permission for performing pooja in ASI-controlled temples but the same right was denied to Muslims. The seminar also drew the attention of the community that a beautiful mosque in Sonipat (Haryana) was turned into a temple after the partition of the country. Its case was won by the Haryana waqf board from Supreme Court but no one has courage to take back the possession of the mosque.

The seminar passed more than a dozen resolutions unanimously. It urges Muslim organizations to set up a research center at national level and to monitor and social audit the performance of all Waqf boards.

It also underlines the fact no Waqf board in the country has research and investment sections that are necessary for formulating policies and programmes.

Another resolution asks the Waqf boards to create funds for providing pension to divorced women who have no means to meet their needs.

On protection of graveyards,   Maulana Ameen Usmani recalled Qazi Mujahidul Islam’s fatwa that Muslims can build a roof over graveyard and that can be used for shopping complex or for a parking lot.

There is no doubt that the history of waqf in India is very old and sad one and this responsibility falls on the shoulder of the concerned persons from the Community. It said that the Waqf properties accounts for about four hundred and eighty thousand acre of lands and Waqf institutions in terms of mosques, schools, tombs, graveyards and shrines is about three hundred and 85 thousands.

In this context, Fiqh Academy has been doing excellent job to create awareness about Waqf at the intellectual level. In this regard, the Academy earlier had organized four seminars on Waqfs in different parts of the country.