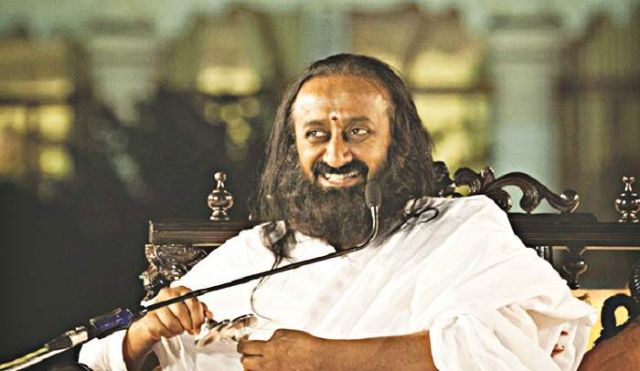 By Kushagra Dixit and V.S. Chandrasekar,

New Delhi : Art of Living founder Sri Sri Ravi Shankar, who is of late involved in mediation on the Ayodhya issue, says the best solution to the festering Ram Janmabhoomi-Babri Masjid dispute is an out-of-court settlement under which the Muslims gift the land to the Hindus for building a grand Ram Temple.

The 61-year-old spiritual leader, who met leaders of both Sunni and Shia sects of the Muslim community recently, also says that he is not in touch with the government — and that it has nothing to do with his efforts.

Ravi Shankar, who has a global following, denies vehemently that he talked of “bloodshed” in case the Supreme Court rules the title dispute in favour of one community or the other.

“Because it’s Lord Ram’s birthplace, there is such a strong feeling connected with the place. And since it is not that important place for Muslims and (is) also in a place where there is conflict, namaaz is not acceptable. Anyway, it is not going to serve the purpose; and when it is not serving the purpose of the other community (Muslims), then, it should be gifted,” he told IANS in an interview.

“So, in either case, there will be discord in society. I want to create a win-win situation, where both communities come together and respect for each is restored, where respect of each is honoured. That is the formula we are suggesting… why not do it?” he said.

The spiritual leader said he was hopeful that an out-of-court settlement could be reached because he has been talking to people in both the communities, and they both agree that there should be a settlement.

“On that only (was) the initiative mooted. It’s not that I jumped into it suddenly,” he said.

Ravi Shankar acknowledged that the temple dispute was a polarising factor all over India and that is why there was a need for all communities to come together.

Asked about his meetings with leaders of the Shia and Sunni sects of the Muslim community, Ravi Shankar said that both the sects agree that they should settle the matter outside court.

“There is already a Shri Ram Temple existing there (at the disputed site). They all know that it cannot be removed. So, we should sit and talk,” he said.

Sunni scholar Maulana Salman Nadwi was expelled from the All India Muslim Personal Law Board (AIMPLB) on February 10 after he backed Ravi Shankar’s formula following a meeting with him — along with Uttar Pradesh Sunni Waqf Board chief Zufar Farooqui — at the Art of Living Bengaluru ashram. Ravi Shankar met Nadwi again in February in Lucknow.

On March 6, Ravi Shankar wrote to AIMPLB proposing an amicable solution where Muslims would gift the entire 2.77 acres of the disputed site to Hindus as a goodwill gesture and, in turn, Hindus would gift five acres of land near the site, to build a bigger mosque. The AIMPLB, however, had rejected Ravi Shankar’s proposal.

In a letter to the president and members of AIMPLB on March 6, Ravi Shankar spoke of “four options before the country” to resolve the dispute and discussed the possible outcomes of the Supreme Court’s verdict favouring one community over the other.

Referring to the first possibility of the court declaring that the site be given to the Hindus based on archaeological evidence that the temple existed long before the Masjid, Ravi Shankar said Muslims would have serious apprehensions about the legal system and lose faith in the judiciary. This could also lead to Muslim youth taking to violence.

Even though the Muslim Personal Law Board and other community leaders say that they will accept the verdict, in the long run the feeling that the court has done injustice will prevail for years.

If the Hindus lose the case and the land is gifted to Muslims for re-construction of the Babri Masjid, it would cause huge communal disturbance all over the country. “Winning this one acre of land, they would, however, permanently lose the goodwill of the majority community,” he said.

Ravi Shankar talked about the Allahabad High Court judgement allowing both a temple and mosque to be built there being upheld, and the “fourth option” of a temple through legislation, and said in the letter to AIMPLB leaders that “in all the four options, whether through the court or through the government, the results will be devastating for the nation at large and the Muslim community in particular”.

“The best solution, according to me, is an out-of-court settlement in which Muslim bodies come forward and gift one acre of land to the Hindus who, in turn, gift acres of land nearby to the Muslims, to build a better mosque. It is a win-win situation in which Muslims will not only gain the goodwill of 1,000 million Hindus, but it will also put this issue to rest once and for all.

“A palak nama (plaque) will recognise that this temple has been built with the cooperation of both the Hindus and Muslims. It will put to rest the issue for future generations and coming centuries,” he said in the letter.

Asked about his reported remarks on bloodshed, Ravi Shankar said, “I have never said that. It’s a distortion. I said that we don’t want a conflict in this country like what I have seen in Syria.”

(Kushagra Dixit can be reached at kushagra.d@ians.in and V.S Chandrasekar at chandru.v@ians.in)