Chennai : The lockdown promulgated through 144 orders to contain the contagious transmission of Corona pandemic has brought life to a standstill in Chennai. The roads wear a deserted look as people are allowed to come out only for essential requirements. Mass gatherings are prohibited and people are restricted from attending marriages and funerals. If a person expires due to corona the condition is more pathetic for relatives are not even allowed to see the face of the deceased.
In this circumstances Ramachandran (78) a retired Joint director of School education department of the Government of Tamil Nadu and a resident of Govindan street, Collector Colony, Aminjakarai in Anna Nagar Constituency Chennai passed away on 11.04.2020 due to heart attack. 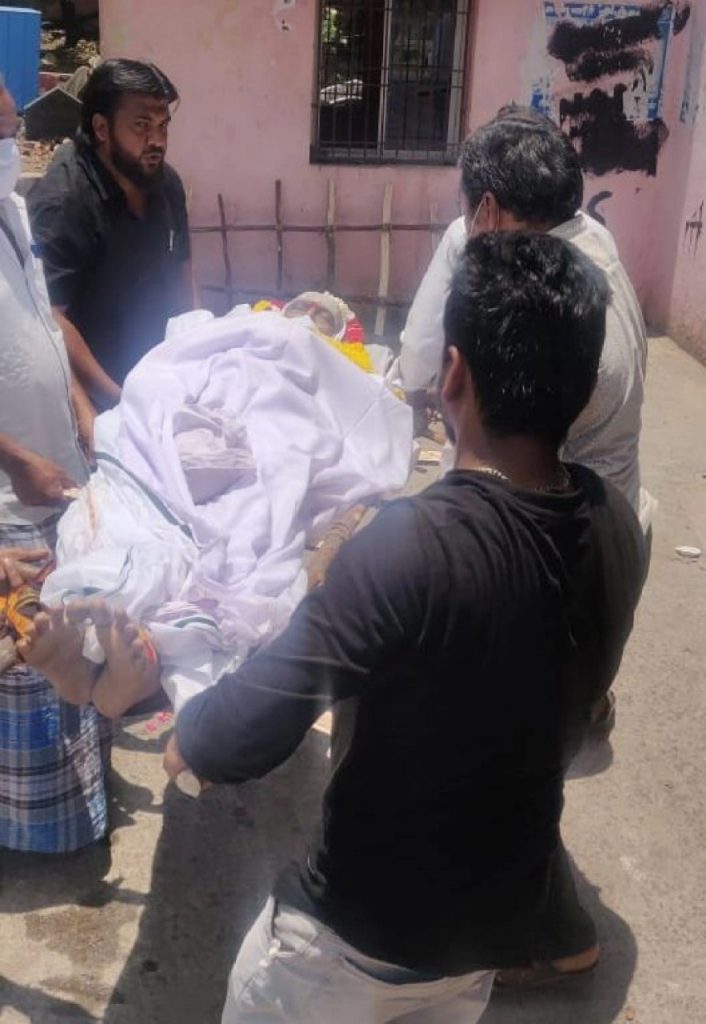 Ramachandran a native of Pudukottai is survived by two daughters one residing in the United States and another in Chennai. Due to the lock down the family faced difficulty in performing the last rites as his close relatives and friends could not attend the funeral. When the information reached the cadres of Tamilnadu Muslim Munnetra Kazhagam (TMMK) a team led by Central Chennai District Treasurer Mohamed Ali and consisting of local office bearers Tamim Ansari, Muthu Mohammed, Saddam Hussain, Nizamuddin and Zakir Hussain helped the family to carry the body of Ramachandran to Anna Nagar crematorium and helped to perform the religious rites according to Hindu religious customs.

This Humanitarian gesture has been highly appreciated by the residents of Anna Nagar. Mohammed Ali, TMMK’s Youth Wing State Secretary said “TMMK Cadres have taken up the responsibility of assisting people in dire needs. It is in this circumstance this humanitarian assistance has been rendered by TMMK cadres. Likewise TMMK cadres also pacified the agitated people of Ambattur who opposed the last rites of a hindu doctor belonging to Andhra Pradesh being carried out in Ambattur graveyard and helped in performing the last rites for the doctor’s dead body in the of absence of his family members.”

Mohammed Ali, District Treasurer, who participated in the last rites of Ramachandran said ” Ramachandran sir’s house is very adjacent to our local unit office and he is well known to the TMMK cadres. We were informed about the sad demise and absence of relatives and friends by Manickavasagam, Son in law of Ramachandran. Then we went to Ramachandran’s house to assist the family in carrying the body and performing of the last rites according to Hindu religious customs along with the lone personnel available in the graveyard.”

Manickavasagam son in law of Ramachandran said ” Ramachandran is residing in this locality for the past 20 years.He is well known in this area and had many Muslim friends. Due to lock down relatives and friends could not attend the funeral. The assistance of TMMK cadres in performing the last rites of Ramachandran cannot be easily forgotten. “

Karnatka village sets an example of religious harmony in India