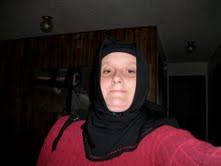 Shakira Graham, 35, Female, Student, Mother and a part time office worker was a former Christian, Reformed Church (Dutch origins). She reverted to Islam when she was 18 years old. She kept her name as she discovered that Shakira, her birth name is a Muslim name

She grew up in a town that is known for its Almonds and she was never really forced to go to a church. Her grandparents were deacons in the Christian Reformed Church and would take her from time to time to Sunday school and Church. Her mom never forced a religion on her and told her to make my own choice. She was Wiccian herself. She always had issues with the Trinity but no one could really explain it to her other than “Just believe” and that was it. Her grandparents were disappointed when she didn’t join the church at 16.

‘ I started looking for a religion when I was 17, I researched all the major religions and Islam kept coming back to my mind. My interest was peaked and so I spent two years studying Islam’. Shakira tells about her initial interaction with Islam.

She kept praying and studying, and finally took the plunge so to speak after almost 3 years. She felt comfortable with her choice as she had no questions that had gone unanswered.

There was a mixed reaction of her family and in laws . ‘ I never told my Grandparents, it would have devastated them, my mother never really accepted it to the day she died. My friends didn’t really care one way or another. My ex-husband was never supportive of it at all but my in-laws were cool with it.’

It was a challenge for her to face the people’ reaction in social as well as professional life and some time she faced very negative comments . ‘ I found acceptance in bigger cities like in Chattanooga but the current town I reside in I get a lot of looks and snide comments. I have been called a “terrorist, traitor, told to go home, etc” I found that bigger towns are more comfortable Muslims especially for the new converts. ‘ Her co-workers have no problem with her some of them ask questions about Islam.

She didn’t get the support from Muslim community . Elaborating her bitter experience she says ‘it was a very insular community and looked down on who they considered outsiders. I have found much support online but I have gotten a lot of flak from born Muslims who feel us reverts don’t really “know” Islam or look down on American Muslims’.

She is not very hopeful about Islam in near future and she is very concerned about the sectarian division in the Muslims . ‘I see the Ummah divided as further sectarian divides come open sadly. I don’t see a Caliphate anytime soon or sadly in my lifetime.’

She advises that Ummah needs to understand the problems of reverts, Muslims should not look down on reverts as “lesser” for reverting and be more open.

Shakira plans to finish college in the next three years and go into teaching while raising her son as an American and a Muslim.