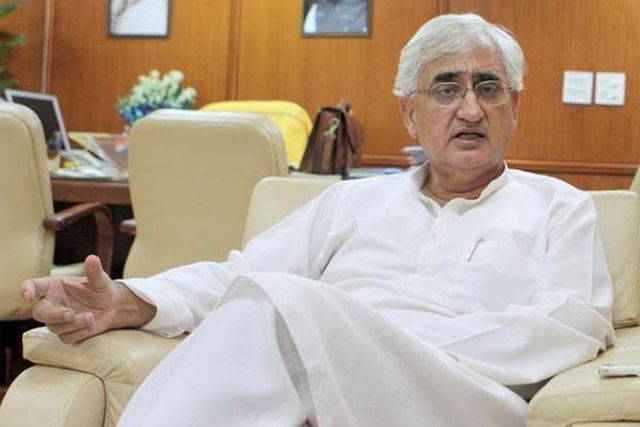 By Sarwar Kashani and V.S. Chandrasekar,

New Delhi : A united opposition needs to decide about its leadership “sooner than later” based on “ground realities” to fight the Bharatiya Janata Party (BJP) in the next Lok Sabha elections, says senior Congress leader and former minister Salman Khurshid.

He also strongly favours a pre-poll arrangement between all opposition parties as he feels that post-elections it “becomes more of a number game and encourages horse-trading”.

“I prefer that there is an arrangement before the elections,” Khurshid, a former external affairs minister in the government of Prime Minister Manmohan Singh, told IANS in an interview.

He said that issue of leadership would be decided at an appropriate time without falling “prey” to the BJP trying to create fissures and confusion in the joint opposition camp.

“For each one of us, our leader is important. But the fact is also that the Congress is the leading party. The leading party, however, is not the only party. You may be the first amongst equals.

“You may have the possibility or the potential of being the largest party. But what should be done in such circumstances? That is for the leaders to decide, instead of us speaking out of turn and making their job more difficult… but sooner than later they will have to decide.”

He said current political circumstances in the country have made coalition so necessary that you cannot even wait for five years, hoping that, maybe, a coalition would no longer be needed by then.

“Waiting for five years might put things in such a way that you will not have a chance at all. If there is a consensus of coalition today, we should go for a coalition. This I think is the rational and sensible view.”

Asked if the Congress was ready to be flexible and play second fiddle if needed and let a leader from a smaller party be in the driver’s seat, he said it was “a wrong way of looking at it”.

“Somebody may have a concentration of large number of seats in a state where the Congress doesn’t have that many seats. But when they come to Delhi, they will have to deal with the Congress that may have larger number of seats from different parts of the country. All of us should sensibly look at this to find the right solution.”

Six months after a CBI court ruled that there was no proven scam in the 2G case, Khurshid, who is also a former law minister, has authored a new book “Spectrum Politics: Unveiling the Defence” (by Rupa Publications), in which he suggests, among other things, that the Congress needs a bit of BJP like the BJP needs a bit of the Congress to survive.

What does it mean? Khurshid explained that the Congress didn’t fight the BJP allegations of corruption and minority appeasement before the 2014 elections as aggressively as it should have. Resultantly, its leadership was demoralised and had accepted defeat even before contesting.

“The Congress has already realised that we had become the target and vulnerable to an unfair attack on us both on the grounds of corruption and grounds of appeasement.”

Asked how the Congress was countering the BJP narrative with Prime Minister Narendra Modi, its biggest crowd puller, Khurshid said his party needed to become a better story-teller.

“We should not worry only about arithmetic. We should also worry about the poetry of democracy. We must know how to talk, converse, dialogue and sell dreams. This is how we must train all our leaders to be. That’s the way we will succeed. We have (less time). Therefore we have to work hard. Work overnight.”

He said the Congress also needed to draw “strategically correct balance between issues related to majority and minorities in the country”.

“We have to understand that the majority has a stake in this country. You can’t vaguely ever assume that majority doesn’t have the stake because majority is the power of democracy. Why should the BJP have a monopoly or claim a monopoly over the majority?”

He said this “soft belly” of the Congress that the BJP has often targeted “has to be hardened”.

Asked if Congress President Rahul Gandhi’s temple runs was the party’s “soft Hindutva” strategy, the former minister said he was going to temples as part of “a strategic message that we will balance the rights of majority and minority”.

He said it was not a tilt or a shift towards majority, but a message of the Congress’ strategic equality “that we have always believed in”.

“But periodically you might need something to show more of it.”

He said there was no need for the minorities to get “wrong signals unnecessarily” about it.

(Sarwar Kashani and V.S. Chandrasekar can be contacted at sarwar.k@ians.in and chandru.v@ians.in)