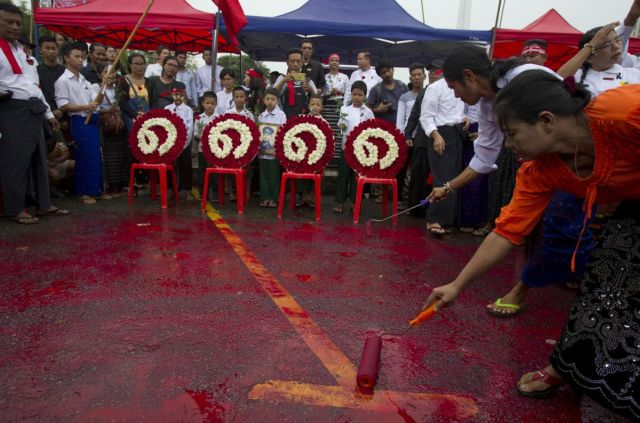 Yangon : Myanmar on Wednesday commemorated the 30th anniversary of the pro-democracy student protests that swept the nation in 1988, resulting in the death/imprisonment of thousands of people.

Several ceremonies across the country marked the People Power Movement or 8888 Uprising that peaked on 8.8.(19)88.

Yangon University displayed a makeshift prison cell as well as photos and films of the protests and political prisoners in remembrance of the movement, Efe news reported.

Some of the student leaders from the uprising delivered speeches at a function attended by over 1,000 people.

Another event in the city offered floral tributes to those who lost their lives.

The 8888 Uprising began in March 1988 as a student movement in Yangon against the socialist one-party state under dictator General Ne Win who drove his country into poverty.

More than a million people from all walks of life, including monks and school children, protested against the government to demand a multi-party democracy.

The often-violent uprising — which included soldiers opening fire on protesters — ended in September 1988 after a bloody military coup by the State Law and Order Restoration Council.

The uprising led to the resignation of Ne Win and the emergence of independent leader Aung San’s daughter and now de-facto Myanmar leader Aung San Suu Kyi, who addressed the public at the time, to appeal for peace.

While many were in jail for decades, political prisoners were released in a 2012 amnesty and many now work as politicians and human rights activists.

It has only been in recent years that people have been allowed to openly commemorate the 8888 Uprising.