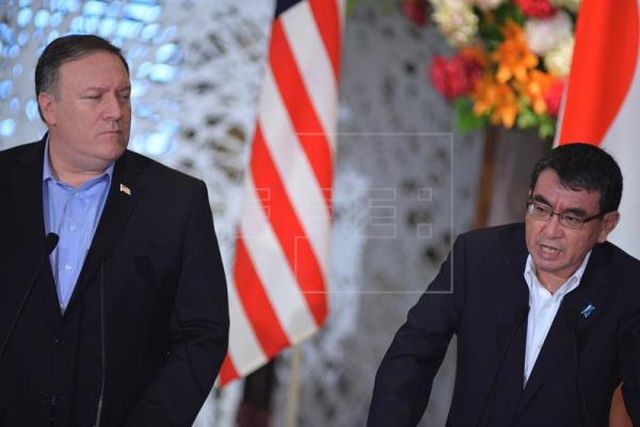 Tokyo : Visiting US Secretary of State Mike Pompeo on Sunday said North Korea had reaffirmed its commitment to denuclearization during his recent trip to Pyongyang.

At a joint press conference here with his Japanese and South Korean counterparts, Taro Koko and Kang Kyung-wha,Pompeo described his talks in North Korea as “very productive” and these were in “good-faith”, adding that Pyongyang had agreed to the destruction of a missile facility, reports Efe news.

He also said the sanctions against the regime would remain in place until it has completely dismantled its nuclear weapons program.

“While we are encouraged by the progress of these talks, progress alone does not justify relaxing the sanctions regime,” Pompeo said, adding that the road ahead would be difficult and challenging.

Pompeo downplayed criticism by the North Korean foreign minister Gen. Kim Yong-chol, who on Saturday called Washington’s attitude during the negotiations “regrettable” and “gangster-like” and the outcome of the talks “very concerning” in a statement issued hours after the top American diplomat’s departure.

He said Pyongyang understood that the regime’s denuclearization must be complete and verified.

Kim is considered an important figure of North Korean intelligence and was a key player in paving the way for the historic summit in Singapore between North Korean leader Kim Jong-un and US President Donald Trump.

Pompeo also reiterated the US’ commitment to defending its allies, including South Korea and Japan, and said that Sunday’s trilateral meeting, the third in less than a month, served to strengthen cooperation to ensure the implementation of the agreements signed by North Korean leader Kim Jong-un and US President Donald Trump at a summit in Singapore last month.