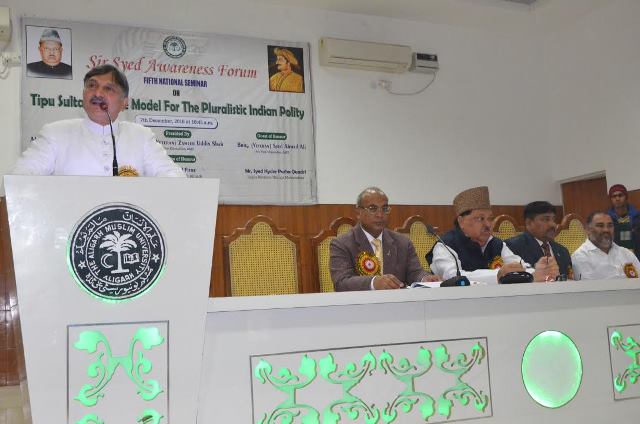 On the occasion, the Chief Guest, Al-Haj Dr Qamurul Islam, MLA and former MP and Cabinet Minister, Karnataka said that Tipu Sultan was not only a champion of secularism at his time but was also a freedom fighter and saviour of India.

He added that Tipu Sultan was an excellent administrator, in whose tenure there was marvellous work?

? done with construction of dams, plantation and irrigation. Dr Islam also pointed out that Tipu Sultan abolished the Jagirdari System during his rule along with abolition of slavery and child labour. “Tipu Sultan also prohibited the production and consumption of illegal liquor, during his rule,” said Dr Islam.

“As an army administrator, Tipu Sultan protected the Sringeri Sharada Peetham Matt Temple from the attacks of the Maratha rulers,” added Dr Islam. He also thanked AMU administration for having a Tipu Sultan Block in the University premises.

Presiding over the function, AMU Vice Chancellor, Lt General Zameer Uddin Shah (Veteran) said that Muslims in Uttar Pradesh should learn from their Muslim brethren in south-Indian states in terms of literacy and education.

He also informed that the AMU Chancellor, His Highness Syedna Mufaddal Saifuddin has recently donated 1000 computers to the University.

General Shah also pointed out that AMU has taken an initiative of opening a chain of secular schools with Islamic ethos in various parts of Uttar Pradesh and at AMU Centres of Malappuram (Kerela), Murshidabad (Bengal) and kishenganj (Bihar).

The Vice Chancellor further said that Tipu Sultan was a secular and forward looking Muslim ruler of his time, who was also a hero to the whole country and his contribution and sacrifices should not be forgotten.

Pointing out that the Indian Army Academy teaches the army structures of Tipu Sultan and Mughal Emperor Babar in its curriculum, AMU Pro Vice Chancellor, Brigadier S Ahmad Ali (Veteran), who attended the function as a Guest of Honour said that Tipu Sultan’s army and administrative structures are relevant even in today’s world. “Tipu Sultan lived a life of a soldier more than a king,” he added.

Brigadier Ali further said that it is sad that most accounts written on Tipu Sultan by the British historians show him in a negative light as he always resisted the oppression and tyranny of the British, while fighting for his motherland in which, he eventually sacrificed his life.

“Tipu Sultan not only commanded the first naval force in the history of India, but he was the first Indian ruler and army administrator to use rocket technology,” said the Pro Vice Chancellor adding that Tipu Sultan wanted to uplift the lower strata of society in his time as he provided the Shudras (lower caste Hindus) with property and equal civic rights.

He further said that Tipu Sultan gave grants to 156 Hindu Temples and his army had a big portion of scheduled caste Hindus.

Professor Shakeel Samdani from the Department of Law and President, Sir Syed Awareness Forum said that the subjects of Tipu Sultan’s kingdom lived in a composite culture and equal rights.

He added that the composite culture during Tipu Sultan’s time is still present in the modern day India despite repetitive attempts to divide people on the basis of faith by the British Raj and other fascist forces.

Prof Samdani also pointed out that Tipu Sultan wore a ring, which had an inscription of Hindu God, Ram written on it and this bears testimony to Tipu Sultan’s secular credentials.

Mr Helal Firoz, Commandment, RAF, who also attended the function as a Guest of Honour said that Tipu Sultan was a great soldier and strategist, who was pioneer of India’s early struggle for independence from colonial aggression.

Prof M Saud Alam Qasmi, Department of Sunni theology said that Tipu Sultan’s mission and aim was to establish justice in society and it is a sad that certain historians are distorting history to present Tipu Sultan in a negative light.

Dr Mohibul Haq, Department of Political Science threw light on how certain elements are creating false propaganda to distort history. He added that a brilliance of Tipu Sultan was that he realised that colonialism was a threat to the whole country before other rulers could understand the coming of foreign aggression.

Farhan Shamsi read the Forum Report while Ms Shagaf Nawaz proposed the vote of thanks.