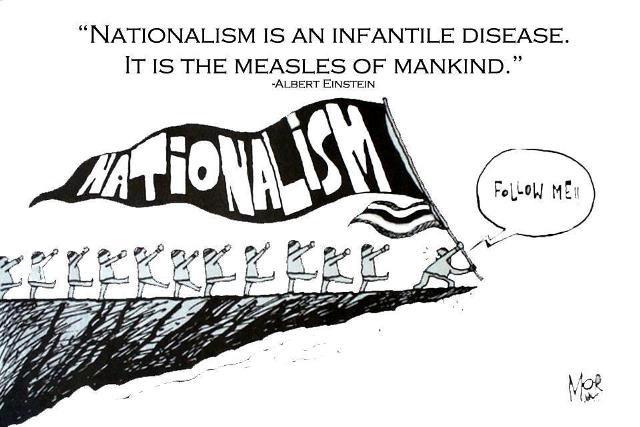 In the current regime of fascist mode of nationalism, demolishing the concept of unity amidst diversity, the political philosophy of Muhammed Iqbal vividly defines what the Muslim needs to be said in case of nationalism. Even litterateur like George Bernard Shah and scientists like Albert Einstein said the fallacy of nationalism as the gravest danger to the edifice of a community. According to Einstein ‘Nationalism is an infantile disease.Its a measles of mankind.’ Many ideologists deny the theory of nationalism that turn as hatred to other cadres. Rabindranath Tagore says in the book ‘Nationalism’, published in 1917, “The range of Morality and piety in a politicalized community that promotes on a single idea may be comparatively low.”

There is a huge alarm or premonition between the words of Tagore. In case of Muhammed Iqbal, his early hood was famous for patriotic sentiments. His works like ‘Hindustani Bachom Ki Geeth’ and ‘Thasveere Dard’ are still the best sellers for the patriots. Despite the early notions, Iqbal strongly stood against the notion of nationalism after his comeback from Europe. As a result of colonialism, Nationalism was erroneously interpreted as notion of elite and the negation of others. Thus a Muslim can’t support the trend of nationalism the negate Muslims and other minorities like Dalit. The western mode of nationalism that pursues only ones ideology is not acceptable.

Nationalism as an issue of controversy is getting its importance, when it defined from religious doctrines. Does Islam promote nationalism? Can a believer be able to pursue both religion and nationalism?

It is clear that no religion can rectify purely the idea of nationalism, provoking the birthplace as their range of mood. The present eagerness of Fascist nationalism is mere concept, which assures nationalism on religious symbols, rather than nation’s codes. Despite the allegation of Islam, Christianity has no religious tensions apart from the identity of west. Thus an understanding on the notion of Islam regarding nationalism becomes important.

The notion of Islam is too different from western perspectives. Islam has no barriers over tribes and territories. Prophet Muhammed said “There is no power for Arabs over non Arabs. To god, one who is righteous is great”. Allah said In Quran “O mankind, indeed we have created you from male and female and made you peoples and tribes that you may know one another. Indeed, the most noble of you in the sight of Allah is the most righteous of you. Indeed, Allah is Knowing and Acquainted.”

In the Islamic creed, there is no scope for nationalism or Marxist ideology. In a social and political epoch, the acceptable doctrine is Islam. Before the Prophetic regime, tribal classifications won its superiority amidst Arabs. Even, they used language for sectorial taxonomies, naming non-Arabs as Ajam, which means dumb. They Arab took pride in tribe rather than religion. But Islam rectified the notion of one god, which depletes all nomenclatures.

The creed, proposed by Prophet Muhammed, respected Salman, Shuhaib and Bilal, belonging to Pars, White Romans and Black Ethiopia respectively, through a single range of vision, disregarding sectorial disparities. And Prophet Muhammed said: “Those who propagate the solidarity of tribes and offers their life for its ideology does not belong to us.”

The foremost weapon that pagans used was to provoke sectorial superiority in Islam. But the notion of Islam seemed to be different as Prophet proclaimed Islam as its national ideology. We can see the same racial prejudice in Jews. They refused to accept the creed of Muhammed, as he belongs to the descendant of Ismail and not of the Israelites.

When prophet entered Medina, this same ideology of tribal classification was made, as the pagans made conflict amidst Ows and Khazraj. Thus next to Paganism, the prejudice of land and blood came as the second enemy of Islamic creed.

The Muslims nationality is Islam. The term ‘Ummath’ negates territorial boundaries. Besides, Islam ensures peace and equality through the notion of Tauheed. Thus Islam muscularly criticizes the India-Pak dispute. The diaspora of Prophet Muhammed from Mecca to Medina strengthens the ideologies of Muhammed Iqbal. Despite the ideology of Islam, The Arabs, Iraqis and Turks (The identity upon territories) are the victims of western mode of nationalism. Iqbal questions what Muslim earned from such theories of nationalism. We can just wind up the discourse by saying the prominent quote of Pundit Jawaharlal Nehru in his book ‘Discovery of India’

“The notion of nationalism has challenged the foreigners. But what is the place of Muslim in Indian Nationalism”

Muhammed Shafeeque CM is a freelance writer pursuing B.A in Economics from the University of Calicut: shafeeq2cm@gmail.com