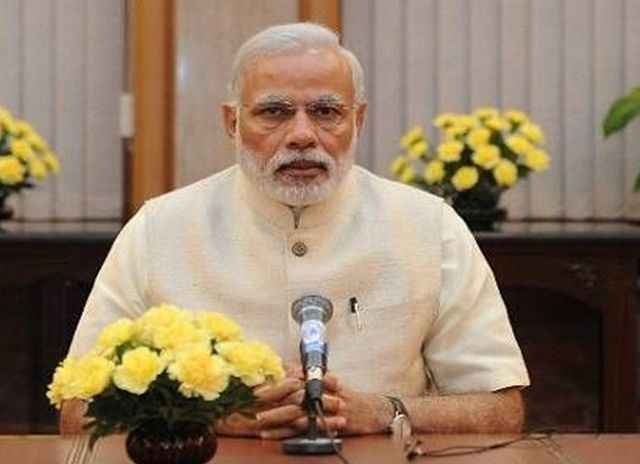 New Delhi : Prime Minister Narendra Modi on Sunday said that only refraining from war cannot ensure peace. Instead, there is a need for “united universal cooperation” to combat terrorism, climate change and for economic development and social justice.

Modi made the remarks in his monthly radio programme “Mann Ki Baat”, ahead of November 11 – the day when World War I ended a hundred years ago.

Modi said India had no direct connection with the War but it was an important event because Indian soldiers fought bravely and sacrificed their lives.

“The world witnessed a dance of death and devastation during the World War I. Around one crore soldiers and almost the same number of civilians lost their lives. This made the whole world realise and understand the importance of peace.

“The definition of peace has changed in the last hundred years.

“Today, peace does not only mean ‘no war’. There is a need to work unitedly to address issues such as terrorism, climate change, economic development to social justice through universal cooperation and co-ordination. Development of the poorest of the poor is the real indicator of peace,” Modi said.

On climate change, the Prime Minister said people only have to look back at the glorious past and the rich traditions for remedial action and have to understand the lifestyle of the tribal communities who live in consonance and in close coordination with nature.

“The tribal community believes in very peaceful and harmonious co-existence but if somebody tries to harm and cause damage to their natural resources, they do not shy away from fighting for their rights,” he said.

Modi cited the example of Gurbachan Singh, a farmer from Punjab who during the marriage of his son, told the bride’s father to promise him not to burn stubble in their fields.

He mentioned about the farmers of Punjab’s Kallar Majra who are mixing the stubble with the soil by ploughing their fields rather than burning. “A small constructive step plays a vital role in creating a positive environment.”

Modi recalled Sardar Vallabhbhai Patel’s contribution in keeping India united and said the nation will pay him tributes on his birth anniversary on October 31 by inaugurating his world’s tallest skyscraping statue.

Lauding the performances of Indian sportspersons in the Asian Para Games and Summer Youth Olympics, he said the country was setting new records not just in the field of sports but also in “uncharted areas” and stressed on the “4S” — spirit, strength, skill and stamina — as key elements in the field of sports as the core foundation of the nation.

Recalling the successful organisation of the FIFA Under-17 World Cup in 2017, Modi said India was hosting the Men’s Hockey World Cup 2018 in Bhubaneswar between November 28 and December 16.

Mentioning about ‘Self 4 Society’ portal which has been launched with a view to motivate employees of IT companies for social activities, Modi said their dedication and vigour can make every Indian feel proud.

The Prime Minister congratulated Sikkim for winning the prestigious Future Policy Gold Award, 2018 for encouraging the sustainable food system and said the northeast region has made grand progress in organic farming.