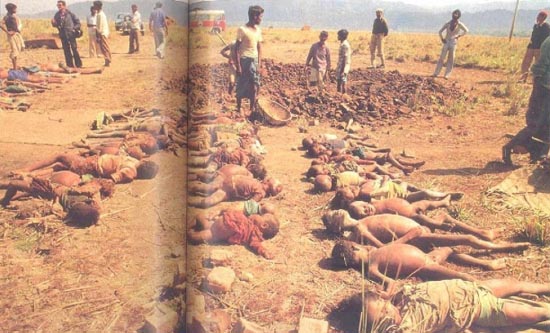 Assam has witnessed violence on many occasions since Independence over the issue of identifying ‘foreigners’, or illegal immigrants from Bangladesh. Even today, there is a political uproar over the National Register of Citizens (NRC) and Citizenship Amendment Bill, 2016, both dealing with the ‘outsider’.

The most violent protests on this count broke out on 18 February 1983, and culminated in a horrific bloodbath known as the Nellie massacre. Nearly 2,000 Muslims were slaughtered by a mob in just six hours.

ThePrint recalls the events leading up to the day on the 36th anniversary of the tragedy.

Who is a foreigner?

The ‘foreigner’ issue dates back to Partition. However, it gained momentum in the late ’70s when regional groups raised it as part of an agenda on illegal migrants.

Ahead of the 1983 Assam elections, the Congress government at the Centre opposed the deletion of the names of such ‘foreigners’ from the electoral rolls. In response, the All Assam Student’s Union (AASU) challenged the Centre — opposing the inclusion of ‘foreigners’.

Talks between the Indira Gandhi government at the Centre and the AASU leaders were inconclusive and the outfit began to mobilise the local population against holding elections in Assam.

In January 1983, top AASU leaders, including Prafulla Kumar Mahanta and Bhrigu Phukan, were arrested and the Centre announced elections on February 14,17 and 20.

Two prominent newspapers in the region, Assam Tribune and Dainik Asom, which supported the movement, were restrained from publishing reports related to the ongoing agitation.

AASU, along with the All Guwahati Student’s Union and the All Kamrup District Student’s Union, organised the anti-election agitation on a large scale.

The agitation turned violent in Assam: Several bridges were burnt and roads blocked to prevent access to the polling booths and the family members of the candidates who had applied for nominations were kidnapped.

Reports from the Tewari Commission that conducted an official enquiry into the riots note that between January 1983 and March 1983, 545 attacks took place on roads and bridges, and over 100 kidnapping incidents were registered.

It said that 290 incidents of police firing and lathi charge — in order to curb the agitation — were reported in Assam.

Centre beefs up security ahead of polls

In order to ensure security during the polling, around 65 battalions of the Central Reserve Police Force (CRPF), along with several other forces, moved into the state.

Makiko Kimura in her book The Nellie Massacre of 1983: Agency of Rioters writes that “150,000 armed men in uniform were in place to ensure law and order — one army man for 57 voters — turning Assam into a military battleground rather than a political state suitable to democratically elect political representatives.”

However, the forces were not of much use as they were unaccustomed to the terrain, the locals as well as their language. They were forced to depend on the local police for guidance, who were hostile.

Arun Shourie, who covered the massacre, noted this fact in an India Today article: “…the men (CRPF jawans) insisted, for instance, that they would not move out on patrols or do anything at all except in section-strength, that is, in group of seven or so…”

At the height of the protests, relations between the Muslim and Hindu communities deteriorated, leading to the Nellie massacre.

It started in a systematic manner in Borbori village on the morning of 18 February, 1983. Nellie and 13 other villages were surrounded by a mob armed with guns and machetes.

In the bloodbath that followed, over 1,800 people were reported killed while the unofficial death toll is as high as 5,000.

Hemendra Narayan, a journalist from The Indian Express reported, “In a systematic manner the houses of Muslim settlements at Demalgaon…were burn…the entire picturesque green hill range was covered with thick black cloud of smoke, which even the mid-day sun failed to penetrate. It was darkness at noon.”

The majority of victims were women and children as men were able to run fast and escape the rampaging mob.

Days before the massacre

On 15 February, three days before the massacre, Zahir-ud Din Ahmed, officer-in-charge of Nowgong (Nagaon) police station, sent a telegram to the 5th Battalion of Assam Police based at Marigaon, warning about the possibility of violence in Nellie. The telegram stated:

“Information received that L/Night about one thousand Assamese of surrounding villages of Nellie with deadly weapons assembled at Nellie by beating of drums. Minority people are in a panic and apprehending attack any moment. Submission for immediate action to maintain peace.”

Although a total of 688 cases were filed in relation to the massacre, the police filed charge sheets in only 310 cases that were eventually closed, and not a single perpetrator was punished.

In October 1997, then Assam chief minister Prafulla Kumar Mahanta told India Today, “The matter was over once the Congress government of the time disbursed compensation.”

Then prime minister Indira Gandhi, who visited Nellie after the massacre, stated, “The students and agitators were to blame; they had created a climate of violence by spurning talks with the government.”

AASU claimed that violence had broken out due to forced elections.

That year, the Congress won the Assam elections with a thumping majority by securing 91 out of 109 seats.

Two years after the Nellie massacre, in 1985, the Assam Accord was signed — fixing the cut-off date to identify the foreigners as 24 March 1971, the day before the Bangladesh Liberation War began.

This article was first published in ThePrint.in