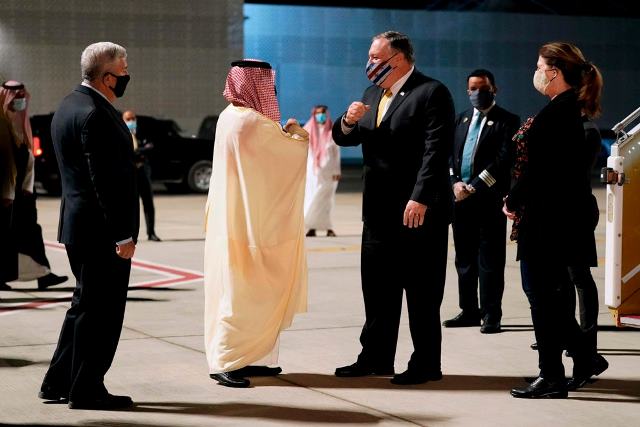 There are strong indicators that Donald Trump, on Israel’s behest, is anxious to take some military action against Iran before his term of office expires.

Mossad chief Yossi Cohen also attended the meeting, which took place in the city of Neom, according to the sources, reported haaretz.

The secret meeting between Natanyahu, Crown Prince Mohammed bin Salman and Pompeo is a cardinal indicator that Trump  may  order a military attack on  Iran’s nuclear facilities  .

Israel is keen for a military action against Iran’s nuclear facility so as to neutralize it before Biden assumes office.If this is not done during Donald Trump’s tenure, it  is apprehended that Biden , on assuming office, would ,reinstate the US -Iran nuclear deal that had been there during Barrack Obama’s tenure. Thus the Iran nuclear Sword of Damocles would continue to hangover its head.

Donald Trump  who now has his eyes set  on the 2024 Presidential Elections, would like to oblige Israel by supporting such action, to elicit the full support of Jews for his next election.

Many analysts also predict such action, which if undertaken by US-Israel nexus and supported by KSA by allowing her air space and base facilities, would plunge the region into a war which may spin out of control with devastating consequences for all involved. Its effects would be far reaching and not confined merely to the region. This possibility must also be creating a lot of anxiety for Biden, whose Govt will then be faced with the aftermath of Donald Trump’s misadventure.

However Trump reportedly backed away from launching a strike when confronted with the scenarios such a hit would likely set in motion. But there are still concerns the lame-duck president may fire parting salvos at his Iranian adversary, leaving behind a conflict for his rival President-elect Joe Biden to untangle.

Hossein Dehghan, an adviser to Iran’s supreme leader who is a possible 2021 presidential candidate has warned that any American attack on the Islamic Republic could set off a “full-fledged war” in the Middle East in the waning days of the Trump administration.

The next few weeks are critical .Unless some dramatic development, inhibiting Donald Trump from implementing his grandiose plan occurs, the region may find itself engulfed in the  flames of a horrific war with far reaching consequences.