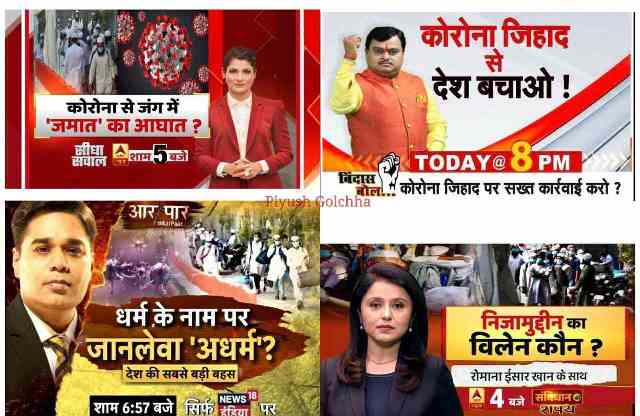 India is now being seen as a hotbed of hatred, nescience, Hindutva Fascism, Islamophobia and deep rooted Anti-Muslim pogroms. Having the history of crimes against Muslims right from its existence- the largest minority in the country, the recent past has witnessed a record high upheaval in the dissemination of Hate propaganda and Islamophobia egged on by the ruling party itself. Glorified by the Hindutva Fascism, the party stands as an offshoot of the RSS ideologue, which is a kingpin of Indian Hindutva – Nationalism Industry. Muslims have been witnessing heinous crimes being committed against them (The worst in any country, apart from few others).

It all took a new turn with the horrific Mob lynching- the premeditated extrajudicial killings, even on the mere suspicions and falsified reasons. The quint in it’s report of ‘India’s lynching files’ reports 113 killings since 2015 , due to mob violence, of which majority of the victims are Muslims ( Other’s being mostly Dalits – Another endangered group). In many cases, Muslims were forced to eat pork, their beards were trimmed, beaten to the pulp, molested and bruised with injuries. Muslims encountering abuse, bullying, attack on faith, allegations, accusations, propaganda, seems a routine exercise now.

The cries and pleads of a Muslim laborer Afrazul continues to haunt, who was axed by a Hindu fanatic and later on burnt to the ashes, and even made his 14 year old nephew film the grotesque act. The gruesome murder, that should have sent shivers down everyone’s spines, however proved opposite. The Hindu Brigade not only celebrated the murderer’s heartless bravery, but also declared him as a Hero combating Love Jihad – the vendetta being used, since many years as a weapon to instigate hate and crime against Muslims. What constitutes the saddest part is that how many times, on earth, have you heard about these horror criminals, not being convicted and still roaming free. This testifies the degree of freehandedness given to the criminals and real agendum of the country’s ruler ship. The recent Anti-Muslim Citizenship Amendment bill is another testimony to the country’s agenda of eliminating Muslims, thus paving it’s way towards becoming a full-blown Hindu Nation. With Muslims, showing open resistance and raising their voices, loudly than ever, repeated the infamous Gujrat Riots 2002, once again in the shape of Delhi Riots 2020 thus resulting in deaths, injuries, and loss of properties. What remains aftermath is the fear and macabre of being a Muslim, in a communalist society.

There has never been the dearth of Hooliganism in Indian politics. Rather it’s a Crime Factory, with politicians having horrible accusations and crime history associated with them thus, adding badges to their already criminal honors. Anti Muslim rhetoric, hate propagandas, rabble rousing, instigating communalistic violence, fetches them votes and fetches them key positions and above all, earns them the labels of patriotism, Nationalism and saviors of Hindutva. The ruling Party’s key member Dr Subramanian Swami is a well known Islamophobe who blatantly claims that Muslims and Islam are a threat to any country, including India. In his recent interview, he openly disdained Muslims and asserted that more than 30% Muslim population in a country will put it in danger.

The trend of Hate Speeches by politicians, against Muslims in particular has gone up in the last decade, at an alarming rate. The Chief Minister of one of the states blatantly called for digging out dead Muslim women from their graves and raping them. Umpteen number of politicians, every passing day, speak ill of Muslims publicly and passes derogatory remarks about Islam. It’s the government’s insouciance towards Muslims, which if not officially, but surely gives green signal to it’s members to ridicule Muslims and thereby promote Islamophobia.

Being considered as the fourth pillar of democracy, albeit acting otherwise, the country’s mainstream media, has been leaving no stone unturned to promote Islamophobia and spew venom against the Muslims. Although with the exceptions, the chaw bacon journalists, circumventing all the levels of professionalism, round the clock, keep on screaming on TV and Social media to defame Muslims, in innovative ways. Over a period of time, with the help of right wing politicians, the Media has devised various nomenclatures of Jihad, which according to them, Muslims have waged against Hindus. This includes “ Love Jihad, Population Jihad and Land Jihad “, which they consider Hard forms of Jihad. The soft forms include “History Jihad, Economic Jihad and History Jihad.” Such ludicrous journalism jargons gains continuous support and appreciation from the ruling party’s leaders as well as the self proclaimed nationalists. The brigade led by the Mainstream media is a typical example of “Radio Rwanda”. Radio Rwanda disseminated Hate Propaganda which resulted in the genocide of almost one million people in 1994. Catalyzing the flames of hatred, the political leaders including influential ones as well as the party’s IT cell, with the help of far right workers can always be seen preaching hate and violence, exclusively against Muslims.

While the newly coined term, Zameen jihad alleging Muslims of occupying land, was in the news, the Coronavirus pandemic reached India. With the Covid 19 entering India, it seems though as Muslims were less suffering in this country. The Islamophobes could not take a break from their vendettas, even during this “Struggle for survival” times. The whole world including India is on the lockdown but Islamophobia could never be stopped. “Corona Jihad” hit the stands all across the country . One of the Muslim religious organizations, functioning all over the world was accused of spreading Covid 19 , thus calling it “ Corona Jihad”. This new fallacy was based on the gatherings conducted at the organization’s Centre based in a Delhi Mosque. Although various evidences circulated on the social media platforms and media outlets suggested that the allegations were out of context and distorted. The country’s radio Rwanda, joined by the keyboard nationalists and far right politicians has waged yet another war on Social media, instigating warranted violence and hate crimes against Muslims across the country, which does not seem ending, anytime soon.

Shah Hussain  can be reached at : Shahhussain.ku@gmail.com