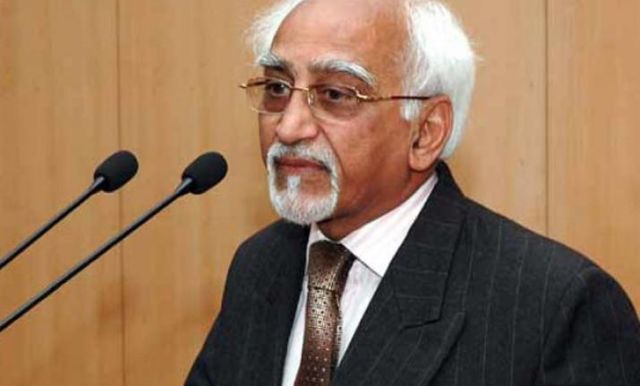 New Delhi : NGOs working among the Muslims in India are filling the space left vacant by the state but they remain isolated despite the dream of a new India by 2022 held out by the Narendra Modi government, former Vice President Hamid Ansari said on Tuesday.

“Many NGOs mentioned in the book operate in spaces left vacant by the state and remain isolated despite the dream of a new India by 2022 being promised,” Ansari said in his keynote address as he released the book “Working with Muslims: Beyond Burqa and triple talaq” authored by Farah Naqvi in collaboration with NGO Sadbhavna Trust.

“They often working on small budgets and are playing the role of a functioning state by providing development opportunities focused on health, education and employment,” he said.

Ansari observed that Muslims in India, apart from poverty and deprivation, specifically suffer from identity-based discrimination and sporadic violence.

“India’s Muslim citizens constitute 14.2 per cent of the population, number around 189 million, are geographically dispersed, are not homogeneous, do have castes or caste-like structure among them, and are afflicted like many others in the rest of the citizen body by deprivation and under-development. In addition, they specifically suffer from identity-based discrimination and sporadic violence,” he said.

He pointed out that until the Sachar Committee Report came out in 2006, it was “insufficiently recognised” that many amongst Muslims also suffer from “multiple development deficits” and therefore required empowerment through “focused affirmative action to enable them to join others and take their place at the commencement-point from which aSabka sath, sabka vikas’ becomes meaningful”.

Quoting from the book, he said that there was an urgent need to provide Muslims with developmental opportunities by “embracing the problem, politically, socially and economically”.

“Big segments of the Muslim community are basically poor and powerless, and do not have access to amenities and opportunities. The state and its citizens therefore need to see this development gap and not build sectarian walls around progress,” he said citing the book.

Giving an introduction of the book, Naqvi said that the book is about the issues which the mainstream politics should be about – but unfortunately is not – that is, health, education, livelihood etc.

She said that the “voluntary sector”, or NGOs could not be a substitute for the state, but still it is crucial.

Noting the activists need to challenge both the politics of communalisation and the Muslim community’s conservatism, she added that the NGOs could not work with just 2019 Lok Sabha elections as the focus but with a broader horizon and long-term goals.