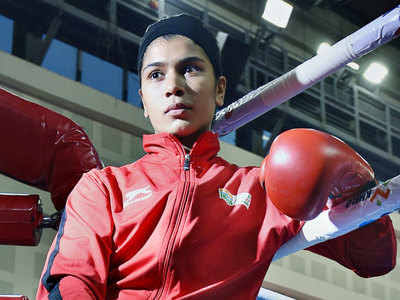 New Delhi, Dec 22 Nikhat Zareen has been named among the Indian women boxers who will take part in the trials for the Olympic qualifiers, thus setting up a potential showdown with six-time world champion MC Mary Kom in the 51kg category.

The women”s trials will be held at the Indira Gandhi Stadium in New Delhi on December 27 and 28.

The men”s trials will be held on the same dates in Vijay Nagar, Karnataka, the Boxing Federation of India (BFI) announced after the selection committee meeting that was held in the national capital on Saturday.

A potential fight between Nikhat and Mary will be a culmination of a long saga of punches and counter punches between the pair in the media. The latest of these happened at the recently concluded Big Bout Indian Boxing League where Mary pulled out in the last minute citing a back injury.

In the the 57kg category, Sonia will fight former World Champioship silver medallist Sonia Lather while Sakshi will face Manisha.

In the male draw, Vikas Krishan will face Ashish in the 69kg category. Vikas, who took gold at the 2018 Commonwealth Games, is returning to the amateur fold after a stint in professional boxing. Naveen Bora will face Duryodha Singh Negi in the other bout of the weight category.

In the 81kg category, Sumit Sangwan will be able to participate if he is cleared by the National Anti Doping Agency (NADA) of doping charges. He had failed a dope test earlier this month. Brijesh Yadav and Sachin Kumar are the other two boxers in the category.

Ashish Kumar faces Ankit Khatana in 75kg while Naman Tanwar, Naveen and Gaurav Chauhan have been named in 91kg. Satish Kumar and Narender face each other in 91+kg.