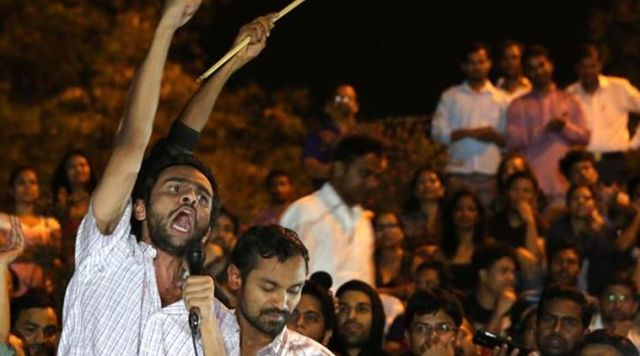 New Delhi : The Delhi High Court on Thursday restrained the Jawaharlal Nehru University (JNU) from taking any coercive steps against the student-activist Umar Khalid till Friday.

“JNU shall not take any coercive action against the petitioner (Khalid),” Justice Siddharth Mridul said and listed the matter for Friday for further hearing.

Khalid was rusticated and fined by a university panel in connection with a 2016 incident when anti-India slogans were allegedly raised at an event.

Justice Siddharth Mridul’s order came while hearing Khalid’s plea challenging the university’s order which has imposed a fine against him.

The court also issued notice to JNU and others and sought the response on the student’s plea.

Khalid’s advocate told the court that former Jawaharlal Nehru University Students Union leader Kanhaiya Kumar has also approached the court and his matter is listed for Friday for further hearing.

Kumar in his plea has sought quashing of the order passed by JNU through its Chief Proctor on July 4.

JNU on July 4’s order held Kumar and others guilty under clause of Discipline and Proper Conduct of Students of JNU and fined them.

The order has been issued based on the report by a high-level enquiry committee that was set up on February 11, 2016.

An enquiry found student-activist Umar Khalid, along with Kumar and Anirban Bhattacharya, guilty in the February 2016 episode in which a group of young men allegedly raised “anti-national” slogans.

It had also recommended rustication of Umar Khalid apart from imposing financial penalty on 13 other students for violation of disciplinary norms.

Kumar, a member of the Communist Party of India’s student wing, was the President of the varsity’s student union that year.

The three were accused — though none yet chargesheeted by police — of raising slogans against the integrity of India during a poetry-reading gathering of students at Sabarmati Dhaba inside the JNU campus on February 9, 2016.