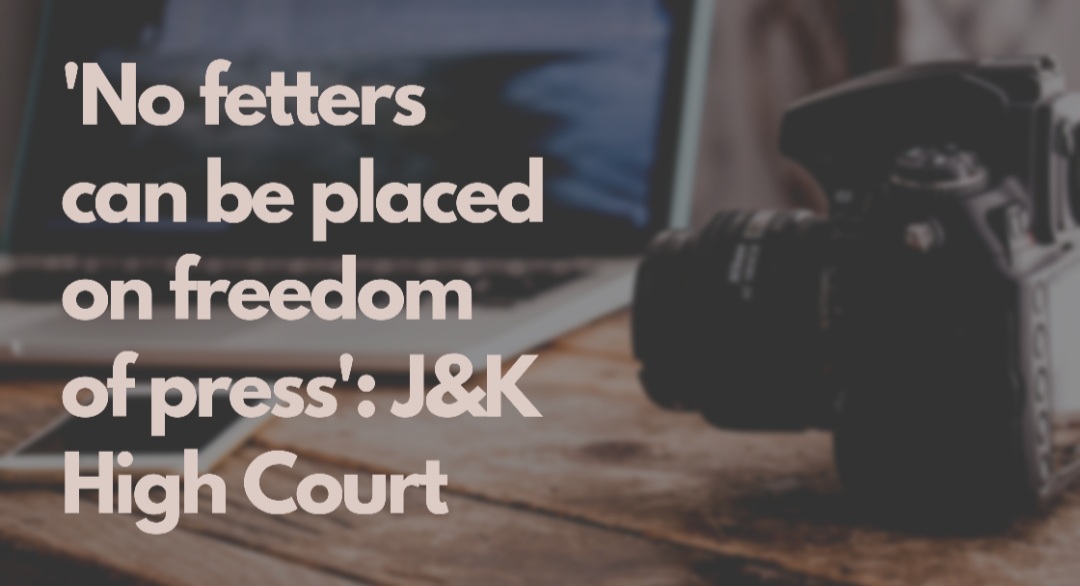 The Jammu and Kashmir High Court on Wednesday said that no fetters can be placed on freedom of the press by registering FIR against a reporter.

The court said FIRs against a journalist is an attack on freedom of the press and abuse of power by police.

The court made this observation while dismissing the FIR filed by police against Journalist Asif Iqbal Naik.

Naik had filed a petition through Advocate Faheem Showkat Bhat seeking the quashing of a FIR registered against him in 2018 at police station Kishtwar under section 561-A CrPc.

The court observed in its judgement that the mode and manner in which the impugned FIR was lodged clearly reflects mala fide on the part of respondents, as the respondents could have given their version in a similar manner, but they chose the unique method of silencing the Journalist, which is unquestionably an attack on press freedom.

According to the court, the press is often referred to as the fourth pillar of democracy, and press freedom is critical for the functioning of any democratic country such as India.
“No fetters can be placed on the freedom of the press by registering the FIR against a reporter, who was performing his professional duty by publishing a news item on the basis of information obtained by him from an identifiable source,” the court said.

Asif Iqbal Naik, the petitioner, is a journalist with the local daily Early Times Newspaper.

Naik had been booked for a story which he covered in April 2018 bearing the headline “Father of 5 brutally tortured by Kishtwar Police,” an FIR was registered by the Kishtwar Police alleging the commission of offences under Sections 500 (defamation), 504 (intentional insult with intent to provoke breach of peace) and 505 (statement conducting to public mischief) of the Ranbir Penal Code (RPC).

According to Article 14, Justice Rajnesh Oswal said Asif Iqbal Naik was carrying out “his professional duty by publishing a news item on the basis of information obtained by him from an identifiable source”. Police charged with intent to “provoke breach of peace” when he reported allegations of torture.