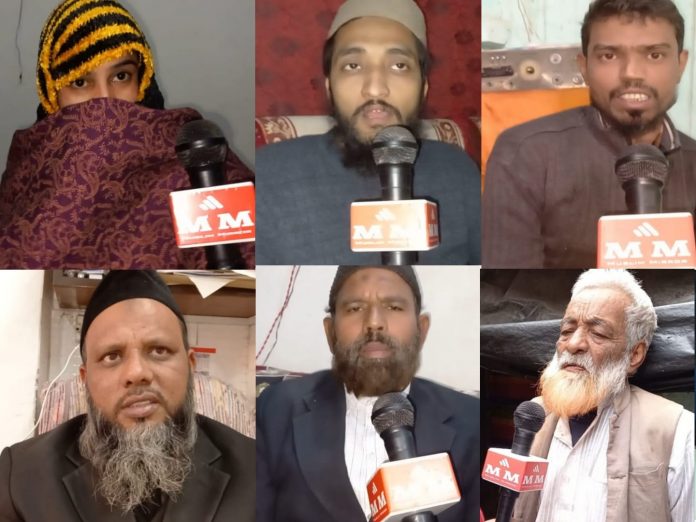 Lucknow/Meerut/Kanpur/Ferozabad:“Two years back, the police killed my husband. I am still waiting for the justice.I have three daughters,  initially people helped us, now no one is around,” said Imrana , wife of Asif who was shot dead on 21 December 2019 allegedly in police firing during protest against citizenship matrix – Citizenship Amendment Act (CAA), National Register of Citizens and National Population Register (NPR). Mother of four, including three daughters, Imrana was reluctant to talk about the trials and tribulations she had been undergoing ever since the death of the sole breadwinner of the family. “Initially, people helped us but no one is around us now,” she concluded.

As many as 22 Muslim youths died during protests across Uttar Pradesh on December 20 and 21 in 2019, according the state government’s compliance report in the Allahabad High Court. The report said that 83 persons were injured in the violence. The 22 deaths were reported from different districts of the state –  one each reported from Varanasi, Rampur, Muzaffarnagar, two from Sambhal and Bijnor, three from Kanpur, five from Meerut and seven from Firozabad. The report also said a total of 833 persons were arrested in connection with the violence.

Imrana is not alone who has been let down by the Indian State, the families of the other deceased also have the heart-wrenching stories to tell, provided anyone is there to listen to: the story of angst and betrayal, of miseries and trial not only from their government but from their own community also. While the present regimes at the Centre and the state had quite “sufficiently signaled” them their intent and that they didn’t expect any word of sympathy from them but they certainly looked to the civil rights groups and, in particular, the Muslim jamaats for legal and financial help. But, they are betrayed by all, so far.

“The poverty-stricken families desperately need community support, not only for long legal battel for justice but also for daily needs. They didn’t receive any compensation from government or any Muslim organization,” said Nahid Sharfuddin who extended some financial help to a few families in Kanpur through her NGO.

“Initially Jamiat Ulema-i-Hind helped us in getting the bail of those who were arrested but they backed out later on. No Muslim organization is working on ground,” said Muhammad Furqan Sahizi, activist from Faizabad.

Fear ran rampant across the sections of Muslim communities in the state after the brutal use of force by the state government. Not even lawyers mustered courage to go to police stations and collect the copies of FIR. No doubt, the few who helped them – financially and legally – ran the risk of being harmed, if not from the state machinery then from the far right goons who enjoy full immunity under the present dispensation.

“The Muslim organizations are quick to issue statement of condemnation and promise support  to victims but they don’t really take required steps,” said advocate Riyasat Ali who is looking into cases of three protesters who were in killed in Meerut.

‘Two years have passed since the killing of my son, I didn’t get any support from any Muslim body,” said Aftab’s mother who was killed in police firing at Babupurva area of Kanpur.

Shockingly, no Muslim religious organizations, including the Jamaat-e-Islami Hind, Jamiat Ulema-i-Hind or for that matter many more groups whose names do not worth any mention here, came for their help.

“The leaders of these organizations you mentioned are satisfied with the publications of their mug-shot embedded press releases across Urdu papers. Don’t you see the same faces repeatedly getting published in Urdu newspapers,” said a journalist working for a Delhi-based Urdu daily on the condition of anonymity.  “However, not all were nonchalant…Some didn’t come to the forefront due to fear,” he added.

‘Owaisi, his supporters remained elusive all through the years’

When the Bill related to CAA was being passed in Parliament, All India Majlis-e-Ittehadul Muslimeen (AIMIM) chief and Hyderabad parliamentarian Asaduddin Owaisi tore it in protest, saying that would enslave Muslims and strip them of their citizenship. However, Owaisi’s “theatrics” collapsed all these years, said Meerut-based Md Salahuddin, whose brother was one of the 22 victims. In the run up to the UP assembly elections, he and his party members are aggressively campaigning in Muslim localities for support, but they remained elusive all these years when, he added. “Did Owaisi or his candidates come to meet us or support us? He got us killed while sitting in his home. He tried to get political benefits over the deaths of our people,” said Salahuddin.

Rais, sole breadwinner of his aging parents, was also killed in police firing in  Kanpur’s Babupurva , said that Akhilesh and Priyanka Gandhi supported us financially. He, however, added that Shamsi community has been giving Rs 5,000 monthly to all three victims’ family of Kanpur. “We receive Rs 5,000 per month from Bisat Khana,” said Rais father referring to Shamsi community’s support.

Another local NGO run by a couple is also providing ration to all three victims’ families from the last two years.

Last month, the police filed a closure report concluding that all protesters were killed by other protesters who fired from illegal weapons. Advocate Saghir Khan, who is  representing few of the deceased families, has filed a protest petition in the court of the chief judicial magistrate, who ordered a reinvestigation into one of the cases. Seven protesters, mostly daily wage-earners, were killed during CAA protests in Firozabad.

Mr Khan is fighting a lone and long battle. ‘Till now no Muslim organization has given a single penny to me. I don’t need their money. We need moral support more than anything else,” he added.

22 Muslims killed in UP police firing during CAA protests, but no FIR lodged even after two years