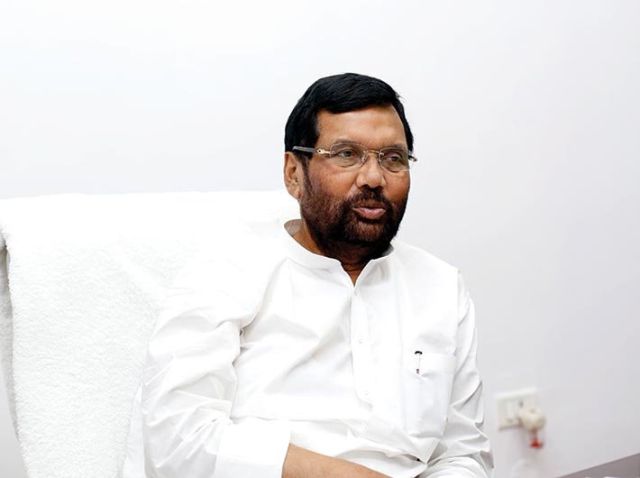 New Delhi : There is no possibility of any new political realignments ahead of the Lok Sabha elections next year, says Food Minister Ram Vilas Paswan, who has also ruled out his quitting the NDA to join an opposition front.

He says there is no alternative to Prime Minister Narendra Modi in the opposition, which is disunited and the much-touted SP-BSP unity would not be there in the general elections. While UPA Chaiperson Sonia Gandhi is in the background, Congress President Rahul Gandhi has no Charisma, Paswan feels.

Paswan, who heads Bihar’s Lok Janshakti Party, concedes that in an election year, even “small” issues get magnified which is dubbed as anti-incumbency and the government needs to change the “perception” at the ground level.

“People like me do politics of self-respect. Those who have self-respect can never stay with (RJD chief) Lalu Prasad. In Congress if somebody wants to meet Rahul Gandhi it will take three months. Even then, the meeting is not sure,” Paswan told IANS in an interview.

Asked about the possibility of a realignment of political parties ahead of next year’s elections, especially after the coming together of SP-BSP in the recent Lok Sabha bye elctions in Uttar Pradesh.

Paswan also ruled out the possibility of quitting the NDA and join an anti-BJP, anti-Congress front.

“There is no dilemma. It’s unthinkable to leave NDA. The question does not arise,” he asserted.

In Uttar Pradesh, the minister said, the SP-BSP alliance is not going to happen.

In the last parliamentary polls they contested in all the 80 seats in the state on their own but in case of an alliance each of the two parties would have to contest in 40 seats each.

In this case, Paswan asked “what will happen to those who would not get a ticket despite spending their life for tickets in a particular seat? They are not going to remain silent. Obviously they will spoil the chances of others.”

He said some 25 per cent of voters who swing before elections will vote in favour of NDA because they will see Narendra Modi as the candidate for the Prime Minister’s post as there are half a dozen leaders in opposition for the post.

“The voters will see that here is Modi and on the other side are are Rahul Gandhi, Mamata Banerjee, Chandrababu Naidu and many more in opposition. In such circumstances the voters would never think of spoiling his vote and would go for Modiji,” he asserted.

On Sonia Gandhi’s allegation that Modi’s call for “New India” is going to prove to be a mere slogan like the “India Shining and “Feel Good” campaigns during Atal Bihari Vajpayee’s government (1998-2004), Paswan said: “The situation during Vajpayee-ji’s time was different. He was running a coalition government. Modiji is running a government of a single party majority.

“That time (Vajpayee) the government used to move ahead after taking political allies into confidence while this government takes risks. Did any government have the courage to take decisions like demonetisation and the GST?

“When there was India Shining under Vajpayee, there was only one big face in opposition and she was Sonia Gandhi. Now, she has receded into background. There is no charisma in Rahul Gandhi. There are many regional satraps who have emerged as leaders. These things count in elections. In fact, the opposition is not united and will not unite in future.”

Asked about Modi’s “ache din” promise in the 2014 election campaign, Paswan said:
“For those who are angry with Narendra Modi, what are options for them? Who are they going to support? Had Rajiv Gandhi fulfilled the promises he had made? Will people now vote for Rahul Gandhi…There is no alternative to Modi. There is no vacancy for the Prime Minister’s post.”

Talking about four years of theModi government, Paswan said when the government enters into election year, even small issues are given the shape of national concern and thisis dubbed as an anti-incumbency against the government.

“What needs to done by the government is to propagate properly the development work done at the ground level. The perception needs to be changed. This government has done noting against the interest of the Muslims but there is a perception about the government that it is anti-muslim.

“Similarly, the government has done a lot for the SCs and STs but the perception about the government is of being anti-Dalit. The Prime Minister never spoke a word on controversial issues like construction of Ram temple, Article 370 or any Hindutava issue.”

Queried about the accusation that the Prime Minister does not take any action against fringe elements who give a bad name to the government, Paswan said: “Its an internal matter of the BJP and I am only an alliance partner. But I can say he is taking steps to control the hardcore Hindutva line of the some the leaders.”

In this context, he referred to former VHP working President Pravin Togadia as an example in the wake of his being sidelined in the organisation during the recent election.

On the defeat of BJP-JD(U) in the Lok Sabha and Assembly by-polls in Bihar recently, Paswan said it was on expected lines.

“The sympathy wave played a major role in win of the candidates. “MY” (Muslim+Yadav) equation of RJD chief Lalu Prasad is not new for the state. It’s an old practice of the RJD. Besides this, Lalu has no support of any other caste group. Lalu Prasad is in jail and facing corruption charges. People will soon forget him.”

When it was suggested that Lalu Prasad may get the sympathy of the people of Bihar, Paswan said: “After some days, the people will forget him. In India, people forgot the emergency. What happened in Haryana when Om Prakash Chautala was jailed? People forgot him. New leadership will emerge in Bihar.”

As far as NDA is concerned, he said “we are intact. Nitish has his own vote bank.”

In Bihar and Uttar Pradesh, the minister said, the biggest issue is of caste. “In Bihar, if Scheduled Caste does not support the RJD, it can’t do anything. But there will be problem if the SCs join him. The issue of development is secondary in Bihar. Social issues like caste remain on top.”