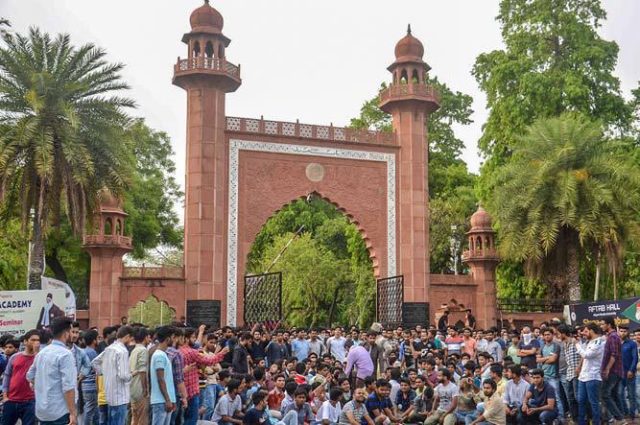 Aligarh : The Uttar Pradesh Police  could not find any proof of sedition in the early probe against the 14 students of AMU who were charged with sedition on Wednesday, said media reports.

The students including the president of students union , were charged after a local BJP leader Mukesh Kumar Lodi filed a police complaint alleging that the students had indulged in violence and shouted anti-India slogans outside the main gate of the institution the previous day.

Mukesh Kumar Lodhi had alleged that he was attacked outside the university on Tuesday. The students beat him up after seeing BJP stickers on his vehicle, he said. They also shot at him and his associates, and shouted anti-India, pro-Pakistan slogans, his complaint read.

But no slogans can be seen in the video evidence he submitted, the police said. “If there is no evidence, sedition charges would be dropped,” an officer told the media.

The police action had drawn widespread criticism from the opposition. Calling it an example of “state terror”, he state’s key opposition leader Mayawati had called it “condemnable”.

The civil society has condemned the Aligarh police for booking the AMU students under the sedition law.

Former advisor to former Prime Minister Atal Bihari Vajpayee, Sudheendra Kulkarni tweeted: “SEDITION charges?? Against 14 Aligarh Muslim University (#AMU) Students??? Just for an altercation with a TV crew???? This is patently sinister. ‘Sedition’ charge should be invoked in the rarest of rare cases. Else, India will be discredited around the world.”