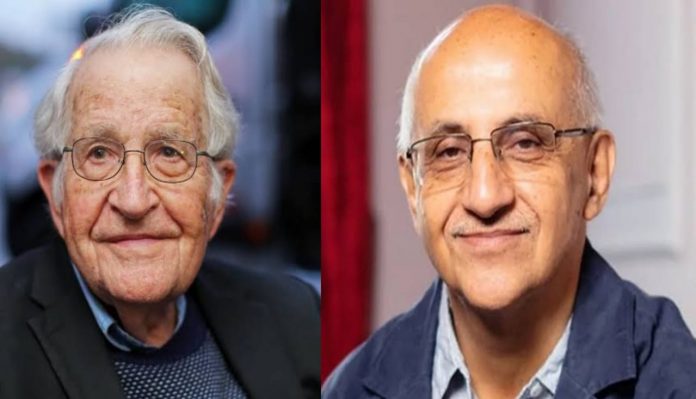 Washington:  The treatment of Indian Muslims during Prime Minister Narendra Modi’s rule was “lethal,” “horrific,” and a threat to democratic values, globally renowned intellectuals and activists said at a Congressional Briefing on February 9.

“[Islamophobia is] taking its most lethal form in India, where the Modi government is systematically dismantling Indian secular democracy and turning the country into a Hindu ethnocracy, with almost 250 million Muslims becoming a persecuted minority,” said Prof. Noam Chomsky, one of the world’s leading public intellectuals and Professor Emeritus at the Massachusetts Institute of Technology.

"Pathology of Islamophobia is taking its most lethal form in India, where Narendra Modi government is systematically dismantling Indian secular democracy."

“The assault is taking other forms as well, including a general attack on independent thought and the educational system primarily directed against Muslim victims, but by now expanding beyond. That’s apart from India’s terrible crimes in Kashmir, those crimes have a long history. They’ve been sharply escalated by Modi’s rightwing Hindu nationalist regime.”

Harsh Mander, a prominent Indian activist now based in Berlin, Germany, and nominated last week for the Nobel Peace Prize, said India’s “immense tragedy” was that people “steeped deeply in the Hindu supremacist ideology that spurred Gandhi’s killing are in fact ruling India today. India’s leaders are more determined than ever to push the country down this horrific path of hate, fear and blood.”

Mander, who was nominated for the Nobel Prize for his work on the Karwan-E-Mohabbat program that helps provide support to the families of mob lynching victims, said India was witnessing early signs of an impending genocide.

“It is tempting for supporters of the ruling establishment to dismiss claims of possible genocide as alarmist… and ‘foreign’ interference, and not efforts ‘to alert the national conscience,’” Mander said. “But the Holocaust Memorial Museum Report warns of the dangers of such denial. ‘We know from the Holocaust what can happen when early warning signs go unheeded.’”

“Online and in public gatherings, a range of other extreme right-wing supporters… are even more candid in spouting their hate, openly calling for boycotts and expulsions, mass killing, genocide and mass rape. Sometimes for the record a thin official line is drawn, claiming official distance from these ‘fringe’ elements. But this claim wears thin because hatemongers are rarely punished, get bail quickly if at all they are arrested, many are instead inducted into party positions.”

Also speaking at the Congressional Briefing, which was organized by a coalition of 17 civil liberties and human rights organizations, John Sifton, Washington, D.C.-based Asia Advocacy Director of Human Rights Watch, said the “greatest threat” to India’s Constitution today was the Modi government’s “promotion of India’s majority religion, Hinduism, at the expense of the country’s secular foundation and its religious minorities. Worse still, there are growing concerns over the independence of Indian institutions. The Election Commission, the judiciary, and the National Human Rights Commission are all facing increasing scrutiny under implications of bias.”

Emphasizing the need for global outcry in order for the Indian government to take heed, Sifton added, “These deterioration’s are threatening India’s underlying identity—the very idea of India as a diverse, pluralistic nation state—and they harm India’s global standing as a functioning, rights-respecting democracy. In every opportunity that presents itself, US officials, citizens, members of Congress, should forcefully communicate concerns about these deterioration’s to the Indian government.”

Speaking on the increased mobilization of Hindu supremacists as upcoming state elections in India draw nearer, Angana Chatterji, who is a scholar at University of California at Berkeley and a co-founder of the International People’s Tribunal on Human Rights and Justice in Kashmir said: “At the onset of critical state-level elections in India, Hindu nationalist leaders are energizing their constituents with calls for massified violence against Muslims and promises to deliver on hate. Minority communities and allies are urgently concerned that, should a BJP victory fail to materialize in state elections, aggravated antipathy to Muslims will inspire Hindu nationalists to take up arms.”

Even as hate speech increases, press freedoms and the right to freedom of expression among human rights defenders have been repressed by the Modi regime, she added.

“Journalists have been exposed to all kinds of dangers – police violence, reprisals instigated by local officials/ministers, illegal detentions, slapping them with sedition and so on,” said Annapurna Menon, a doctoral researcher and visiting lecturer at the University of Westminster. “[Because] India’s ranking has slipped to 142 on the [the World Press Freedom] Index, the situation on ground is extremely alarming.”