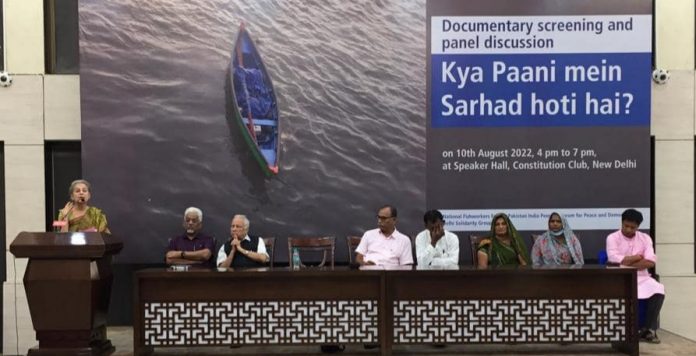 New Delhi: Members of Parliament and prominent activists on Thursday urged Pakistan and India’s governments to deal with the issue of fishermen and workers on a humanitarian basis, as hundreds of fishermen are detained every year for accidentally crossing maritime borders in the Arabian Sea. They were speaking at an event held at Constitution Club here to highlight the plight of fishermen who caught on both sides. On the occasion, a documentary film: _‘Kya Pani Mein Sarhad Hoti hei?’ was screened with a document on the plight of the jailed fishworkers of India and Pakistan.

The film was produced by Santosh Kohle and Pragati Bankhele who were present at the Delhi release. Following the screening of the film, a panel discussion was held which saw the participation of  MPs, political leaders and journalists, and also the families of the Fishworkers who have been in jail in Pakistan.

“It is unfortunate that at a time when Pakistan and India are celebrating 75th year of Azadi, hundreds of innocent fishworkers who have been arrested for inadvertent sea border crossing are in jails of each other and hundreds of boats are rotting in the custody of the other country!” said Evita Das of PIPFPD, while welcoming the participants to the meeting.

“It is cruel that our fishermen are arrested for their pursuit of their livelihood. They have become prisoners of war in a war they were never party to…”, said Dr Syeda Hameed, former planning commission member.

“When I raised this issue in the parliament, sadly I got a very political answer instead of a humanitarian one… The 600 fishermen in the Pakistan jail do not belong to BJP or Congress, they are humans, and they are citizens of India. Every Indian should keep building the pressure so that the govt. listens and acts on this issue and work towards a permanent solution” said Member of Parliament (RS) from Gujarat, Shaktisinh Gohil.

“When Indian students were stuck in Ukraine, the media was engrossed in helping them and a plane was sent to rescue them by the Government of India, but what about the 600 fishermen stuck in Pakistan? Why is it that their lives are not precious to our nation?” asked Kumar Ketkar, MP.

Noted journalist Bharat Bhushan said that “this border issue should be resolved and border lines should be defined… Joint licenses for fishermen should be given for fishermen from both the nations. This will ensure that the livelihood of the fisherpeople is ensured even in the event of war…if the governments want to they can solve this issue in 10 minutes”.

Members of parliament who were present at the meeting included former MP and Kisan Sabha leader Hannan Mollah, etc. Other MPs who extended solidarity to the fishermen’s cause in Delhi included Lok Sabha MP from Diu, Lalubhai Patel and from Gujarat, Rajesh Chudasama.

Fisherwomen and spouses of Fishworkers in jail in Pakistan spoke at the meeting. One of them, Nani Ben Bamaniya, complained about the lack of any communication facility to reassure the family about the  safety of their family members in the prison of the other country.

Issues of consular access, nationality verification, the reactivation of the joint judicial committee on the issue, etc were also raised at the meeting by Jatin Desai, Veljibhai Masani and Jivanbhai Jungi, people who have worked on this issue for many years.

The panel demanded Governments of India and Pakistan to resume dialogue, reactivate the joint judicial committee for prisoners and accelerate the process of nationality verification as well as provide consular access as per the agreed upon protocol. The meeting also demanded the Governments to accelerate the transfer of the mortal remains of the Gujarati fisherman Kalu Vira (who died on 6th July 2022), from Pakistan to India.