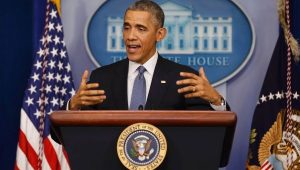 Washington, Jan 6 : Citing the massacre of innocents in Newtown to gunning down of Sikh worshippers in Oak Creek, a tearful President Barack Obama vowed to curb gun violence with commonsense reforms sidestepping the US Congress. But analysts said his move to curb mass shootings through executive action is bound to face legal and political challenges in the face of a powerful gun lobby and a Republican controlled legislature.

“Second Amendment rights (to bear arms) are important, but there are other rights that we care about as well. And we have to be able to balance them,” said Obama in the White House East Room Tuesday, flanked by relatives of those struck down in mass shootings.

“Our right to worship freely and safely — that right was denied to Christians in Charleston, South Carolina,” he said amid applause.

“Every time I think about those kids it gets me mad,” he said wiping tears from his eyes. “So all of us need to demand a Congress brave enough to stand up to the gun lobby’s lies,” said Obama proposing expansion of background checks for buyers.

The measure clarifies that individuals “in the business of selling firearms”
register as licensed gun dealers, effectively narrowing the so-called “gun show loophole,” which exempts most small sellers from keeping formal sales records.

Existing law exempts gun collectors and hobbyists from conducting a background check before selling a firearm.

His administration is also proposing a new $500 million investment to expand mental health treatment across the country.

Republican House Speaker Paul Ryan, said the president had never respected the Second Amendment and that his speech and his actions “amount to a form of intimidation that undermines liberty.”

Several Republican presidential candidates have already pledged to undo the executive actions if they are elected in 2016.

The National Rifle Association (NRA) dismissed Obama’s move on Tuesday and pledged to fight for gun owner rights, but did not immediately outline a planned legal challenge.

The New York Times said Obama’s plan “faces legal, political and logistical hurdles that are likely to blunt the effect of the plan he laid out.”

A number of the executive actions he plans are only suggested “guidance” for federal agencies, not binding regulations, the Times pointed out.

“And many of those measures rely on hefty funding increases that a Republican-led Congress is almost certain to reject,” it said.

“Proposals that would have the biggest effect have long been shelved by even the most ardent gun control advocates who now see an assault weapons ban or mandatory gun buyback programmes like ones in Australia in 1996 and 2003 as political fantasy,” the Times said.

(Arun Kumar can be contacted at arun.kumar@ians.in )—IANS