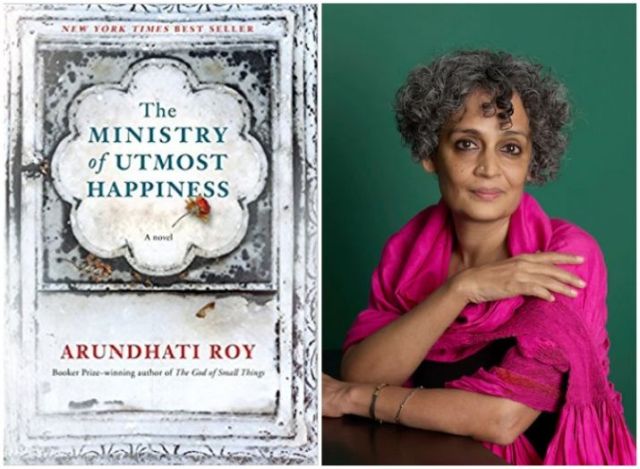 New Delhi : Booker winning novelist Arundhati Roy’s second novel “The Ministry of Utmost Happiness” — written after a hiatus of two decades — is the universe, she says, imagined in many languages which like its characters have no choice but to co-exist. The longing to come home after the companionship it built in 49 languages will see its fulfilment as the Hindi and Urdu editions of the novel — the two closest to its characters as well as the novelist — will release on February 2.

Speaking to IANS ahead of the scheduled launch, the writer extraordinaire said that her novel is structured in a manner that layers after layers have to be peeled to reach to the bottom truth.

“But is there a truth at all?” she asks, maintaining that only fiction can narrate the complexities of our times and that as a novelist, she was also exploring how the written word can give expression to the “strange psychosis” that is happening all around us. It was a novel in progress for about two decades but Roy says she had reached a point when it just needed to flow.

Roy said that she, as a novelist, doesn’t believe in making it “all too easy” for the reader. She toys with her protagonists in the novel, engages in a constant process of exerting and releasing control over their thoughts, actions as well as words — all in a fictional narrative — and suddenly drops it all after taking the reader to a high-point.

She explains that “The Ministry” is a bit like a third-world city, a metropolis submerged under water, and one is only “swimming with the fish” while reading it superficially. “You cannot get through it in one go,” she contends, before pointing out that there are plenty of secret trails and underlying comparisons that are in play in her novel.

You read it once and you are swimming with the fish on top, and then you read it again and you are with the bottom feeders but cannot get through it in one go, she asserts.

At the same time, Roy is mindful that it is written in many tongues and yet no tongue is akin to all. They have their individual characteristics; similarities and dissimilarities with each other, but when placed together in the narrative of a novel, the languages, like its characters, have no option but to co-exist.

Translation for them, she says, is “not a high-end literary art performed by sophisticated polyglots” but it is a part of their “daily life”. She said translation was the primary act that led to the creation of “The Ministry of Utmost Happiness” because the novel is all the time translating, and its adventures with translation is not only limited to languages but also to interpretations and things said, or unsaid between the lines.

Roy, according to Rajkamal Prakashan, who is publishing both the Hindi and Urdu editions of the book, has played an active role in the process of its translation and has spent lengthy hours with the respective translators Manglesh Dabral and Arjumand Ara — both highly revered and masters at the art in respective languages.

She said that the translated works remain faithful to the original text and is translated with a keen attention to the reading experience that the novel presents in its original avatar. The process was not easy as the distinct difference between the literal language and the local street language that some of her characters speak became evident in the first few days of the process.

There were also many words in the original text for which a suitable word wasn’t around in the language it was being translated into.

It was a process of “negotiations”, not “contradictions” and a “protocol” was developed between the writer and the translator(s) so that “The Ministry” retained its original bliss.

The Hindi edition of the novel is titled “Aapar Khushi Ka Gharana” and the Urdu “Bepanah Shadmani Ki Mumlikat”, which will both be launched at India International Centre here.

Our battle for love must be militantly waged – and beautifully won : Arundhati Roy