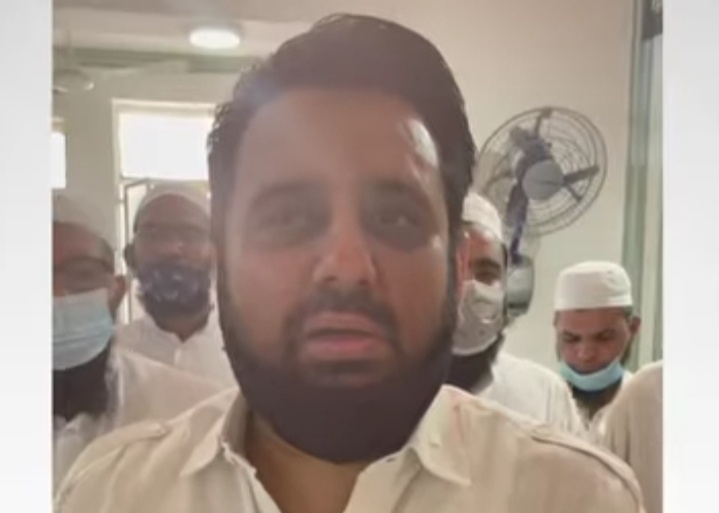 New Delhi : AAP’s Okhla MLA Amanatullah Khan’s “headline-grabbing appeal” for converting mosques into covid care centres backfired with former legislator and community leaders asking him to impress upon his government to build hospital on the land allotted years ago.

Former Congress MLA from the constituency Asif Mohammad Khan said it was an attempt to hide his failure. Taking a swipe at him, he said instead of setting up 300-bed hospitals on the land allotted by the Sheila Dikshit government, Khan ended up “inaugurating” a graveyard in Batla House. As there is no hospital, he did a favour by opening a new graveyard in the locality, he added.

Khan had recently made an impassioned appeal to the local imams and mosque committees for voluntarily converting their facilities into Covid care centres amid spurt in coronavirus cases, but it “backfired” with many local leaders, twitterati calling it publicity stunt. Several write-ups in Urdu dailies “picked holes in his approach for choosing religious facilities” urging him to “initiate with schools, wakf properties and other vacant facilities and, if need be, the mosques too can be converted into covid centres”. He told Hindustan Express, an Urdu daily, “Delhi government schools in the area have adequate space. Why he is not converting them into Covid centres?” 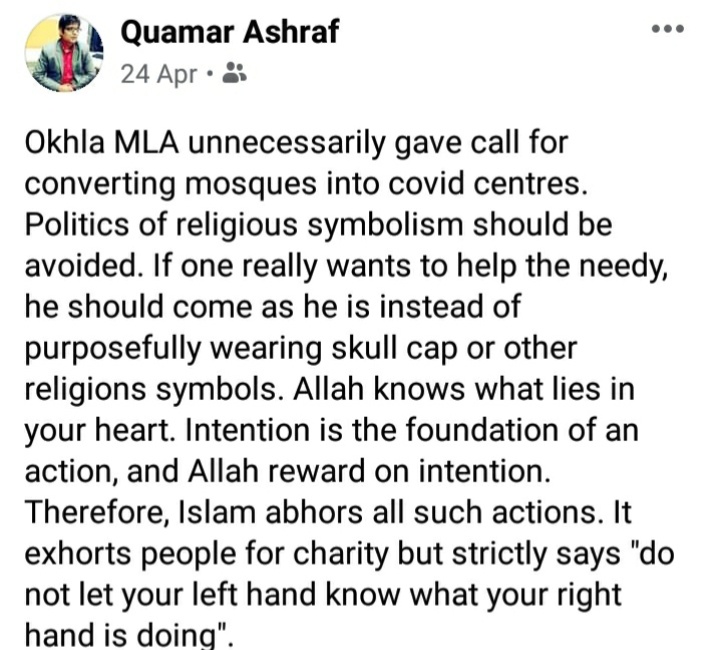 Various health campaigners and local NGOs more often flagged the urgency for a government hospital in the locality which roughly has around a million population, but no government in over two decades ever paid heed to this direction.

Political experts and community leaders, however, are of the view that the local legislators, of different political affiliations, all these years have pitched for “initiating focus on health and education infrastructure”, but the ruling parties don’t feel need for such steps as they take the constituency “for granted” for obvious reason. “AAP is not different even though its pragmatic approach had instilled expectation amongst the youth who were fed up with conventional political parties,” said Yawar Rahman, who runs a health facility in the locality.

“Name me one organised set up with regard to basic facilities such as water, schools, sewage system, cleanliness etc in the locality,” asked AN Shibli, a long-time journalist covering local issues. he said no legislators, including Khan, wanted to face media on these issues. Shibli proved right when Khan disconnected Muslim Mirror’s call when asked about the non-availability of the government hospital in Okhla.

Local Congress politician Mohammad Perwaiz criticised Kahn and Delhi chief minister Arvind Kejriwal. He said, “Amanatullah has a modest educational background. He clicked his photograph standing in the graveyard…What a cheap person he is,” he added.

Notably, volunteers and local hospitals have earned all round praise for extending service to the needy with many providing oxygen cylinders, nefarious activities such as black marketing of O2 and charging exorbitant prices for beds by some health facilities in the area cannot be ruled out.

Al-Shifa Multi-Speciality Hospital is one such health facility in the area which earned the accolade for praiseworthy job with the limited resources. The hospital has got the opportunity to sign a memorandum of understanding (MoU) with Aster Volunteers, the global Corporate Social Responsibility (CSR) arm of Aster DM Healthcare to set up a 50-bed field hospital. It has decided to install a medical oxygen generation plant and construct a liquid medical oxygen (LMO) tank of 1,000 metric tonnes at its premises from its own funds.

Delhi’s Al-Shifa Hospital Sets Up Medical Oxygen Plant n 1000 ton liquid oxygen tank at its premises. They are not waiting for funds from PM-CARES Fund. They don't have to stand in queue for oxygen supplies. A shining example of self-help by the community.https://t.co/sLvMKggLHV

In 2019, Abdul Rashid Agwan, noted social activist and convener of Volunteers of Change (VOC), gave a memorandum to Kejriwal through Khan and MP candidate Ms Atishi Marlena, regarding the 300 bed hospital in Jasola District Centre which was approved by the then CM late Sheila Dikshit, but in vain. VOC requested them for immediate construction and commencement of the government hospital .

Notably ,the Delhi government allotted a plot of around 6320 SQM from the DDA on 21/12/2007 in Jasola area for the construction of the said hospital. A foundation stone was laid for its early construction by late Sheila Dikshit the then Chief Minister of Delhi in January 2010.

Delhi government included this hospital along with 7 other hospitals in its decision on April 2012 as 100-bed hospital, along with Burari, Madipur, Sirsapur, Hastsal, Ambedkar Nagar, (all 200 beds), Dwarka (750 beds), and Buodth Khurd (additional 100 beds). The request seemingly fell on deaf ears and AAP government threw the project in dustbin.